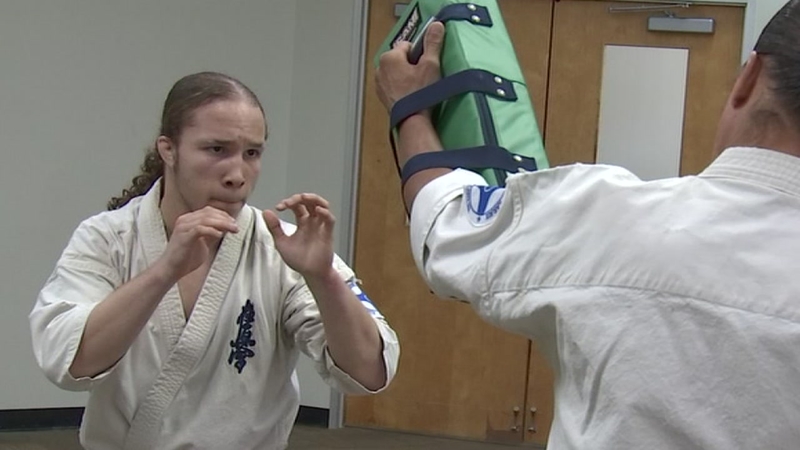 WARREN COUNTY, N.C. (WTVD) -- A father and son living in Warren County no doubt have a very interesting relationship--one that doubles as a typical father-son relationship, and a non-emotional karate bond.

"When we do martial arts we can't have personal feelings or emotions show," said Kenny Buffaloe, a Kyokushin sensei.

"It hurts. It breaks my heart but I have to suck it in and say you know what, I have to because I can't send him out there unprepared and he gets hurt. Then I'm going to blame myself," Buffaloe added.

Kenny plays the role of both father and sesei for his son Christian.

"I wouldn't be here without him honestly," Christian said. "It's very tough because it's just me and him."

"I'm the coach. I have to give him instructions while he is fighting. I have to be completely objective about everything," said Kenny.

Christian took after his father and began Kyokushin when he was 2 years old and started fighting at age 8.

"It really helps everything," said Christian. "I'm the person I am today I think because of Kyokushin."

Kyokushin is a martial art that focuses on mental, physical and spiritual toughness. The athletes wear no protection other than a groin cup and there are no weight classes. A fight is won by visually hurting the opponent to where they can't stand on their feet --or they get knocked out.

"The reason we do that is because in the street or inside of life you never know who you might face outside," said Christian. "You have to trust in your training. Every time before I fight I put in the work and I believe in what I've done up to that point. At that point all I have to do is fight."

"Pain causes fear and once you endure so much pain there's nothing to be afraid of anymore," said Kenny. "Then you have liberation."

Christian is the only official Kyokushin fighter in all of North Carolina. He's a five time All-American and just qualified for the world championship in Japan this November.