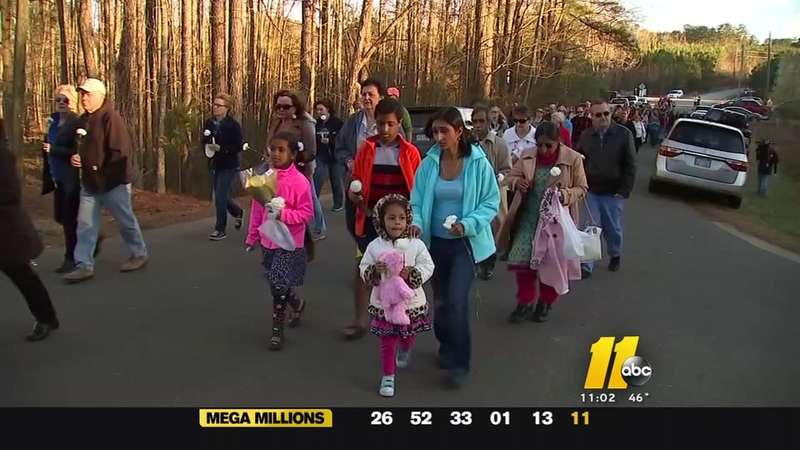 LAKE GASTON, NC (WTVD) -- The Lake Gaston community grieved, prayed and comforted each other Friday night after a horrific crime.

One week ago, John and Nancy Alford were targeted by robbers - Nancy was killed after those robbers allegedly set fire to their home; John is still recovering in the hospital.

"It's just devastation," said Ken Thrasher, pastor at Prospect United Methodist Church in Ebony, Virginia. "Now John has to come back here and heal in this community. I saw pictures on Facebook and then to see this in person is just so overwhelming - to see this ... wow, there's nothing left."

Thrasher - who said John Alford is his mentor - was one of nearly 100 people who came out to a prayer service at Lake Gaston Friday. The service was followed by a walk to the couple's charred house.

"I've heard he was trying to go back into the house to save his wife, but he was pretty badly burned and he wasn't able to," Thrasher added.

A very moving walk to the scene of last Friday’s horrific crime next to lake Gaston. A service was also held to honor John and Nancy tonight. #ABC11 pic.twitter.com/0pbO7twkQh

"I don't know if I could say anything; he was a good guy I know that," Ray Alford noted. "He would come to our family reunions and say the blessings and go about his business and his business was serving you people."

The Lake Gaston Chamber of Commerce helped organize the event.

"We just wanted to do something," said Christina Wells, president of the organization. "It was more about bringing some beauty and some peace to the scene of something really horrific."

The community recalled Nancy and John's years of service.

"At the tender age of 8, John Alford brought me to the Lord and baptized me," said one woman. "His wife mentored me as a child teaching me Sunday school and songs."

Investigators arrested two people earlier this week and charged them with murder. The District Attorney said charges of robbery and arson are pending as well.