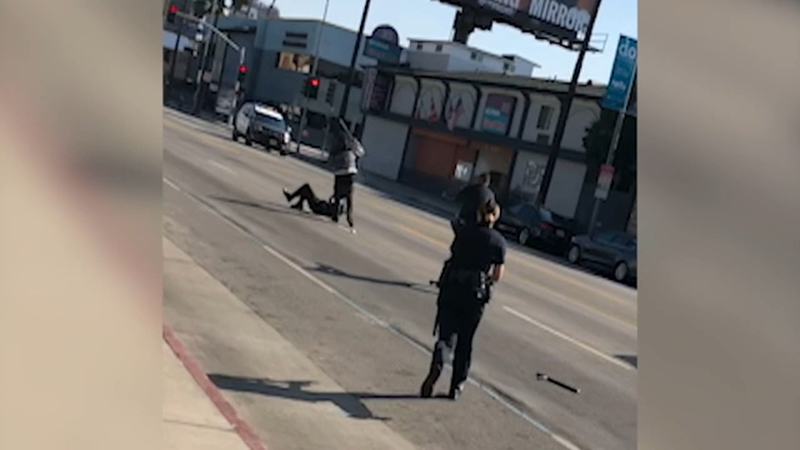 HOLLYWOOD, LOS ANGELES -- Los Angeles police shot and killed a person armed with a machete during a confrontation Monday morning in Hollywood, leaving an officer injured, the LAPD said.

Video from the scene shows the officer chasing the suspect who was running down the street with a long machete. The officer can be heard shouting commands at the suspect, who then turns around and runs toward the officer with the weapon in his hand.

Several shots were fired by the officer as he backed away from the still-approaching suspect, causing the officer to run into the street and subsequently fall down. Just as the suspect reaches the officer on the ground, two additional officers arrive and one shoots the suspect.

The chain of events was sparked around 11:30 a.m. (Pacific Time) when the suspect robbed an auto parts store on Highland Boulevard near Sunset Avenue at knifepoint, police said. He then carjacked a vehicle from somebody at a nearby fast food restaurant, eventually crashing into two police cars as he fled from the restaurant.

Officers began chasing the suspect when he exited the vehicle and started running with the machete in hand, eventually culminating in the fatal officer-involved shooting.

Aerial video from AIR7 HD showed firefighter-paramedics placing an injured person on a gurney and into an ambulance about 11:45 a.m. near the intersection of Sunset Boulevard and Highland Avenue.

A Los Angeles Fire Department spokesperson said the wounded suspect was transported to a medical center. A police officer who suffered injuries that were not life-threatening was being treated at the scene.

This is a developing emergency and will take several hours. Please retweet or distribute to your influence groups to keep traffic clear of the area. Thank you! https://t.co/wQiesQwDjf

The apparent machete was seen in the middle of the street near a pool of blood.