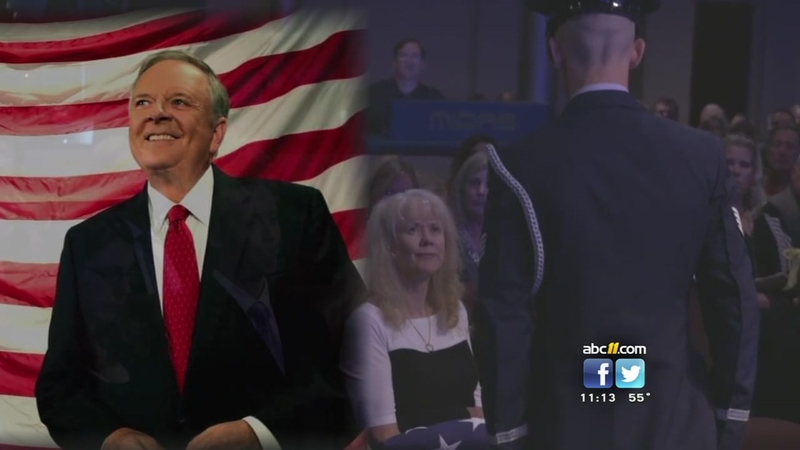 DURHAM (WTVD) -- The church was filled with family, friends, local luminaries of television and government, and lots and lots of former co-workers.

And of the countless words used to describe Larry Stogner at this public memorial service Wednesday night, the ones he wanted to be remembered most by described him as a man of faith -- a Christian man who said he did not fear death. He believed there was a better life beyond.

WATCH THE MEMORIAL IN THE PLAYER BELOW
EMBED More News Videos

Inside Durham's New Hope Church, those of who knew and loved Larry, came to celebrate his life here in this world, grateful for his company.

"In the wee hours of Monday, October 3rd, the world lost a gentle giant of a man," Pastor Benji Kelley told mourners. "(Larry) was one of the most remarkable servants the world has ever known."

Pastor Kelley eulogized Larry here in the same place he baptized him, three years ago.

Larry's wife, Bobbi, led the family in. Her soulmate's ashes carried in by an Air Force Honor Guard.

"On Thursday, when the urn was delivered to our house, mom said, how strange that a man so big could be reduced to something so small. But there was nothing small about the influence Larry had on our lives," said Adam Kirkley, Larry's oldest son.

Mourners celebrated Larry as the kid from tiny Yanceyville who went on to big things; The husband and father, the Air Force Vietnam vet, the born-again Christian and humanitarian, and of course the Hall of Fame of journalist who was more than an anchorman. He was a trusted friend to viewers. And a demanding leader in the newsroom.

"Most of you here tonight know Larry Stogner as a charismatic and charming Southern gentleman who loved to smile and laugh," said ABC11 anchor Steve Daniels. "But those of us who worked with Larry knew a different side; the fiercely competitive journalist and anchorman who always insisted that we were going to be first on the big story and get it right."

Nightline anchor Byron Pitts came to Durham to pay his last respects to the man who took him under his wing as an ABC11 intern, and never stopped being a mentor.

ABC's Byron Pitts shares what Larry Stogner meant to him.

"Any measure of success I've had in television, it happened because of Larry Stogner. I was a kid raised by a single parent. I was the latest intern and this man, this giant, took an interest in me," Pitts said.

At the service, Pastor Kelley revealed Larry left behind one last story.

"Larry wrote a letter to you," Kelley said, holding an envelope for mourners to see.

It was a letter Larry had written and sealed shortly before his death that he wanted read aloud at this memorial.

The first line was signature Stogner.

"At long last, an audience of people not equipped with remote controls!" Kelley read to laughs from the church.

"To Bobbi, my love and soulmate, thank you for easing my pain this last year ... to the thousands of viewers who sent cards or emails, thank you for the kind words. I know I didn't answer each and every one of them, but I am no less grateful to you."