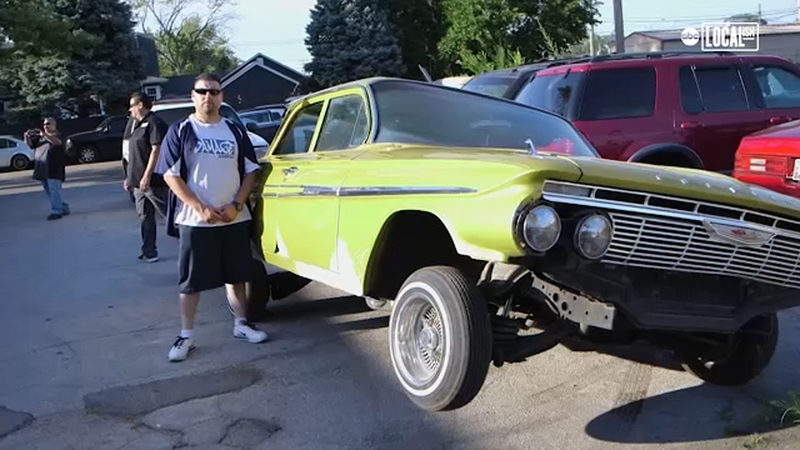 LANSING -- In the south suburb of Lansing, the last Chicagoland lowrider mechanic runs a busy shop. Owner William 'Memo' Chalifoux has been in business for over 25 years. With a full garage and a packed lot, Chalifoux's only problem is keeping up with demand.

"As a kid growing up in Little Village, lowriding actually helped me from getting into any kind of trouble. I mean, never ran with the gangs, never did drugs, nothing," Chalifoux said.

Instead, Chalifoux worked DJ gigs and mowed lawns with friends to raise money for lowriders. He started out by rigging bicycles, but eventually moved on to cars.

Years later, as the customer base grew at the auto shop, other lowriders started planning a car club. They settled on the name Damage Chicago, an ode to their shop and homebase, and started cruising and hosting picnics several times per month.

Damage Chicago is a parade of classic cars, each decked out to the owner's preference.

All white 1939 Pontiac Quality Six with air pumps instead of hydraulics. '68 Chevy Impala, flatback with a rebuilt kit engine. '57 Chevy Bel Air, painted "patriotic red." '85 Buick Regal with a chromed out engine. And on and on.

Robert Ratulowski named his '39 Quality Six "el Otro Mujer," or "the Other Woman."

The '85 regal? Call it the Love Machine.

Jimmy Perez, Jr., owner of the Love Machine, named his car after being hospitalized as a teenager.

"I was hospitalized when I was 18 with a ruptured appendix. And I was watching Cheech and Chong's 'Up in Smoke,'" Perez said. "He pulled up with the Love Machine, I was like, 'Man, I'm gonna name my car the Love Machine.'"

"One of the things I like about these guys," Ratulowski said, "we'll get together on a Sunday afternoon. Take a ride to downtown Chicago. Cruise Lake Shore Drive. Michigan Avenue. Have Dinner, and then head home. Kind of like a family thing."

Herbie Paredes, who's Impala is currently being restored, had a simple explanation for his love of lowriders.