NEW YORK -- It's Fantasy Suite week on "The Bachelor!" Matt James has three women left, Michelle, Bri, and Rachael. Each would get to have a romantic date with Matt and then the offer of an overnight.

Before Matt could get to his Fantasy Suite dates, he wanted to talk to his dad to address what went wrong in his parents' relationship and in their own, so he could move forward. "You've done well," Matt's dad told him. Matt said he was worried about making a commitment and that he wants to be a dad to his future kids. His dad told him, "Wonderful." Matt told him that he wasn't there when he needed him and he started other families. His father said that his own dad died when he was five. His father asked him if he knew what he went through with Matt's mother. He said he came home one day and his mother was gone with Matt and his brother. Matt said, "Well, no one wants to be with someone who isn't faithful." Matt's dad said that he wasn't perfect and then threw in, "neither are you." Ouch. Matt scoffed. Matt said that he was glad his mother stood up for herself. Matt's dad said he wasn't there to talk about his mother he wanted to celebrate Matt's situation.

Matt started to feel like he was hitting a wall in the conversation. His dad cried, and said, "I tried Matt, I tried. I'm sorry I hurt you son." His dad said that he wants Matt to have a healthy relationship and vowed to try to work on theirs. "I don't like this," he said. "I don't like that you are far away from me." Matt told him that he would like for his father to be a part of his life and he would love it for him to be a part of his future children's lives going forward. They hugged it out. They walked arm-in-arm and said, "I love you" to each other.

Tonight’s convo with my dad was hard to experience, and it’s just as hard to watch all this time later, especially knowing the world is watching with me.

Some relaxation time? We can bearly wait 😉 #TheBachelor @mattjames919 pic.twitter.com/CBn1UFwa5k

"Michelle, it's time to get even closer," her date card read. But wow, poor Michelle was getting a date fresh off that conversation Matt had with his dad. Matt met up with Michelle and told her that they would be having a spa day - a Pennsylvania Dutch Spa Day! They put their feet in squishy oatmeal, brushed each other with butter and herbs, and then they took a milk bath. They had a romantic time and did some kissing. After the spa treatments, they spent time talking about how the hometown date went. Matt told Michelle that he really admired her parents' relationship. Michelle said that she thought it was important not to just fall in love, but work on how to stay in love.

At dinner, Michelle said that she wanted to know why Matt is the way he is. Matt said he wants Michelle to know everything about him. He told her that he was trying to figure out why he didn't have a serious relationship or ever fall in love. He said it goes back to the hard times that he saw between his parents, and he wants to have a different experience. Matt said he's working on it so he can be ready for the kind of commitment that comes at the end of this journey. Michelle told Matt she looks at him as her person and the one that she wants to spend her life with. Once they were inside the Fantasy Suite sitting on the couch, Michelle said to him, "I love you, Matt."

Matt told Bri he was taking her on a hike through the woods, complete with heavy backpacks and sleeping bags. Eventually, they made their way to a fire pit and some flat grounds where they could pitch their tent. Bri said she didn't know how she ends up on all of the outdoorsy dates because she's the least outdoorsy person. They laughed as they put their tent together and even got a fire going. Bri got worried that they would be sleeping out in the woods, but Matt said that there's a real Fantasy Suite waiting for them later. Matt said that he loved meeting Bri's mom and friend and loved how excited they were to be with Bri. He said he just didn't want to say the wrong thing or do anything dumb. But, it's safe to say, everyone got along wonderfully.

That evening, Matt told Bri about the conversation he had with his dad. Bri wanted to know if Matt really is ready for marriage and Matt said that he is. Bri spoke about her own troubled relationship with her father. She reminds herself why she came on the show and she told Matt that she still feels 100% ready for an engagement after this. "I'm really am so in love with you because it means the world to me that you can understand me and it really just goes to show why I love the things I love about you." Matt kissed her and said it was a great feeling. They decided to go to the Fantasy Suite!

In the morning, Bri was brushing Matt's chest and saying that the night was everything she expected and a little bit more. Wow! "I got to know really intimate parts about him," Bri said. They got out of bed and cooked some breakfast together. I had to hope that the butter wasn't from his earlier spa date with Michelle.

Bri returned to the hotel with a big smile on her face. Rachael was upset again hearing about Bri's date. Rachael said she's excited about her date but she's in her head about it and is worried Matt feels different about her because he's already been on two dates.

Rachael's Fantasy Suite Date
Rachael sulked into her date and Matt said, "It's been a while." Matt told her that he was excited about their date, and said he was thinking about her. Rachael said she was worried about that. They trudged through the woods to a pottery studio! Rachael was really short and didn't seem invested in the date. She hardly cracked a smile and her little bowl was ending up lopsided. Then she said, "I think I need to talk to you because I don't want it to ruin our day."

"This week was like, unbearable for me," Rachael told Matt. She told him that she pictures him as her future husband and seeing him spend intimate time with other women made her feel the lowest that she's felt. Matt said he was glad that she pulled him aside and that there's no easy way to get through these next few weeks. He promised to be as respectful as he could throughout the process. "When I'm with you, you are all I think about," Matt said. She took the opportunity to say, "I love you" to Matt. Then, they returned to the ceramics and made out all full of clay. 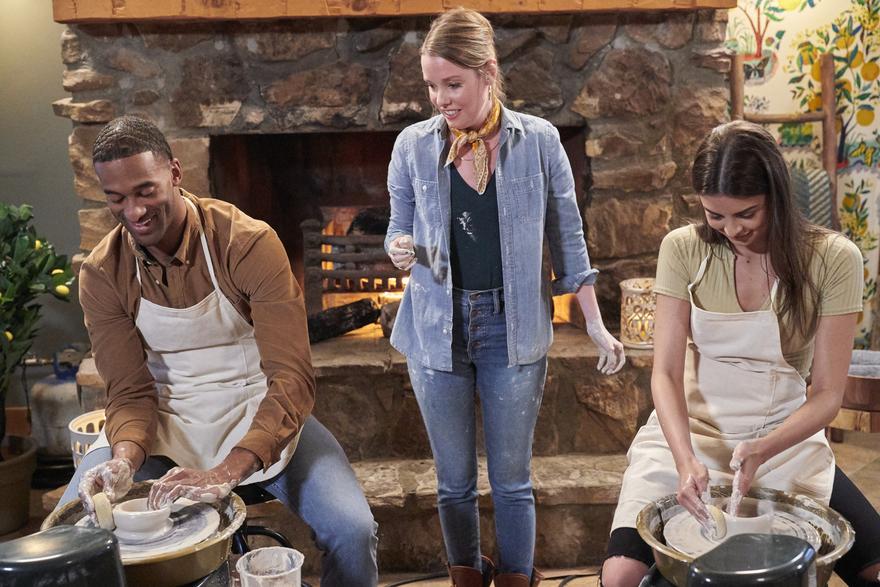 Rachael showed up to the evening part of the date wearing one of the amazing dresses she got on their last one-on-one date with the designer. Matt and Rachael then talked about how they communicate and she said that she worries about ending up heartbroken and didn't even consider for a while that he might worry the same thing. Then Matt shared with her some of the details of his conversation with his dad. She was glad he got the clarity he needed to pursue a future with the woman he chooses. Rachael reassured him that she knows that he would never walk away from his family and all she can think about is their future together.

Rose Ceremony
Matt teared up when saying that none of the women deserved to be sent home after he had such a great connection with each of them. He told the women that he was following his heart. He gave roses to Michelle and Rachael. That meant Bri was eliminated. He walked her out and cried as he told her that he was sorry, and said that there wasn't anything specific as to why he was ending things. He said it's just a feeling that he had and that he still finds her incredible. Bri said that she was hurt, but wasn't faulting him. Tears flowed as she gave him a hug goodbye and got into the limo.

Next Week
Matt's journey will end and he'll have to choose between Rachael and Michelle. His mom is very concerned about him making a rash decision. It messed with Matt's mind and he has a breakdown where he tells Chris Harrison he doesn't know if he can continue and doesn't know what he's going to do!