'It means everything:' Islanders player's gesture life-changing for NC vet with PTSD 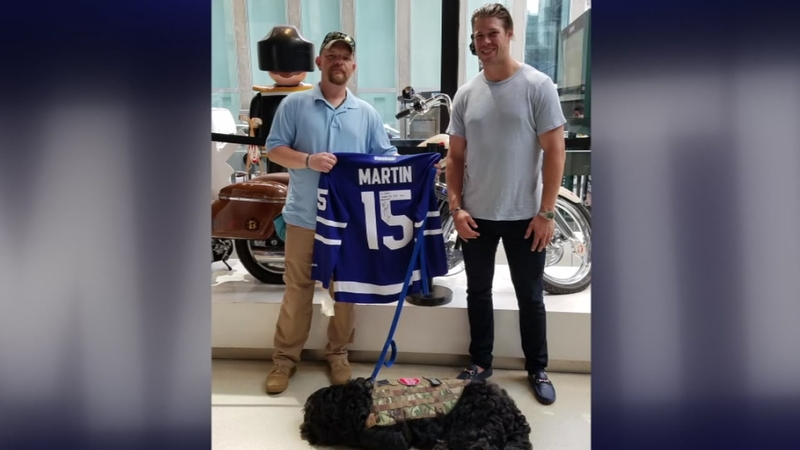 RALEIGH, N.C. (WTVD) -- It's a friendship founded in the most unlikely way for a North Carolina military veteran

"He is my best friend, yes," said Christopher Ellis, referring to Lex, his service dog.

"I'm able to go out in public more with less worries, and that's been one of the biggest things," Ellis said. He's always with me. It's like having a battle buddy, he's always there."

That special bond was made possible in an unlikely way -- through New York Islanders forward Matt Martin.

Martin, whose team is trying to avoid a sweep Friday night in Raleigh by the Carolina Hurricanes, has helped to change the life of this North Carolina veteran.

"You just want to make a difference," Martin said. "Obviously, we have a bit of a platform. Like I said, the resources and the ability to help other people. To really be able to see the difference it makes in their life is a special thing."

Ellis had been in denial about his life challenges.

"I was thinking that nothing was wrong with me," Ellis told ABC11 at PNC Arena before Friday's Game 4. "This is just the way life is now."

Ellis, a retired US Army Staff Sgt., deals with post-traumatic stress disorder, which causes him depression, anger, and mood swings.

"I applied for a service dog through American Humane and I was accepted into their first class of people that were getting dogs," Ellis said.

Through the Matt Martin Foundation, Chris received his dog, Lex, free of charge.

"To be able to help Chris and meet his daughter," Martin said. "I walked around New York City with him without the dog and kind of some loud noises and things would affect him. He was walking around with the dog and he felt a lot more comfortable. One of the cool things is when he's standing one way and his dog will face the other way and watch his back."

Lex creates space around Chris and helps to calm him if he's feeling anxious or irritated, helping Chris to live a lifestyle he never thought he'd get back to.

His wife, again, has noticed.

"Lex has been better than any medication or any therapy that he has done through the VA or tried," Kerry Ellis said. "It means everything. He doesn't know how many lives he's saving by providing or sponsoring dogs. It completely changes the veteran or the person's life that gets the service dog."