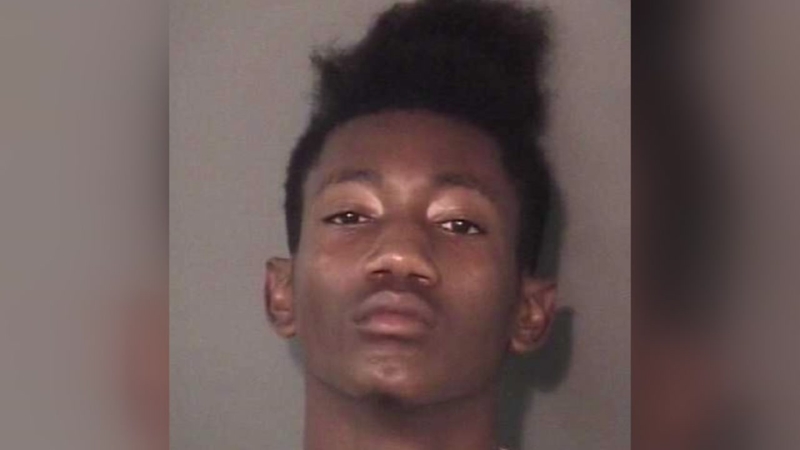 Search on for injured suspect who fled hospital

MEBANE, N.C. (WTVD) -- A 19-year-old man accused of entering a home in Mebane on Friday before being thwarted by an 11-year-old with a machete walked out of UNC Hospital on Saturday morning and is on the loose, according to Orange County Sheriff Charles Blackwood.

According to Blackwood, Jataveon Dashawn Hall slipped out of UNC Hospital wearing a hospital gown with a cup of water in his hand.

Shortly before 8 p.m. Friday night, a nurse entered Hall's room and discovered his bed empty. A review of videotape showed him walking out of the hospital wearing a hospital gown.

Orange County investigators, the SBI and U.S. Marshals are following up leads on his whereabouts.

Hall is 6 feet tall and weighs 135 pounds. His head was wrapped in a bandage when he walked out of the hospital.

Anyone with information on Hall's whereabouts, on this crime, or any other crime is urged to contact the Orange County Sheriff's Office at (919) 245-2900 or call 911 immediately. Do not attempt to approach the individual as we must consider him armed and dangerous.

On Saturday afternoon, UNC Health Care released a statement to ABC11 about the incident.

The other suspects in the home-robbery attempt, a man and a woman, remain at large.

An 11-year-old boy in Orange County stopped the robbery in his home Friday by hitting the thief with a machete.

It happened Friday around 11 a.m. on Yarborough Road in Mebane.

Investigators say he dropped the electronics, left the home and ran. The other two suspects ran off as well.

A short time later, investigators say a man matching the description the 11-year-old gave showed up at UNC Hospital in Hillsborough requesting treatment for an injury to the head.

"Not only did this youngster thwart the larceny attempt but he created blood evidence that very well may lead to a conviction in this case," said Orange County Sheriff Charles Blackwood. "This is a very tough kid who kept his wits about him. At the same time, I want to reflect that this youngster, his family and indeed this community, are very lucky this event did not have a tragic ending for the child."

Once apprehended, 19-year-old Jataveon Dashawn Hall will be charged with breaking and entering, second-degree kidnapping and assault on a child younger than 12.

"I was really upset about it because I don't like to be at home by myself because there are some things that happen around here," said Judy Jackson, who has lived in the neighborhood since 1973. "When we moved out here, there wasn't hardly anybody out here and it's growing."
Report a correction or typo
Related topics:
mebaneorange countyhome invasionrobberymachetechild home alone
Copyright © 2022 WTVD-TV. All Rights Reserved.
TOP STORIES
Icy roads possible; windy and cold Monday
Omicron surge hasn't peaked nationwide: US surgeon general
Triangle Restaurant Week returns to highlight local small businesses
Jewish community strives to 'stay strong' after Texas synagogue terror
LATEST: Some COVID-19 testing centers open on delay
Dozens of RDU flights canceled through Monday evening
Free virtual class on Martin Luther King, Jr. may surprise you
Show More
Already delayed, North Carolina primary could be moved to June
Woman killed after being pushed in front of NYC subway train
Man arrested, charged with Christmas Day murder in Edgecombe County
NY woman reunited with lost dog 5 years, 1,000 miles later
Monday events canceled, postponed due to winter weather
More TOP STORIES News