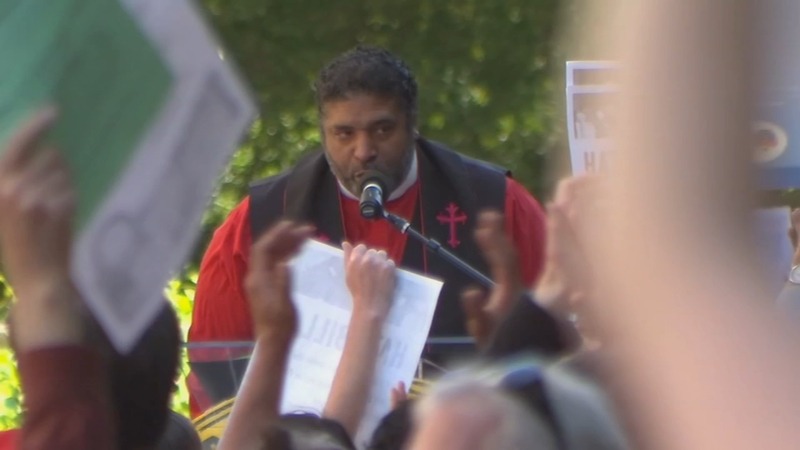 "We will have the largest gathering of poor and low wealth people, religious advocates and others ever in the nation's history," he said.

Barber led the first Moral Monday in 2013, demonstrating against what they call regressive legislation. There have been arrests in Raleigh and other Southern states as social justice advocates called for higher wages and more access to the polls.

He's now co-chair of the Poor People's Campaign, which has Moral Monday activities planned in 10 states.

The Raleigh march will be on the last Monday in March.

"We are committed to the bringing together of folk who have often been divided so that other folk can have political power. And we're saying no more to that," he said.
Report a correction or typo
Related topics:
politicsraleighprotestrally
Copyright © 2022 WTVD-TV. All Rights Reserved.
TOP STORIES
LIVE: Tornado warning issued for parts of northeastern NC counties
Homeless veterans get an assist from Durham's Rotary Club
Truck slams into NC woman's new home
SCOTUS makes it tougher for prisoners to argue counsel was ineffective
Shelf cloud seen in Raleigh ahead of line of storms
New NC flood monitoring system ready for next big storm
Father puts 1,000 miles on his car to find specialty formula
Show More
Student says he was told not to mention 'Don't Say Gay' law in speech
Clayton police arrest man in shooting that injured 1
More than 75,000 pounds of baby formula lands in US amid shortage
Report: Top Southern Baptists stonewalled sex abuse victims
Arby's is selling a fast-food staple it's never offered before
More TOP STORIES News