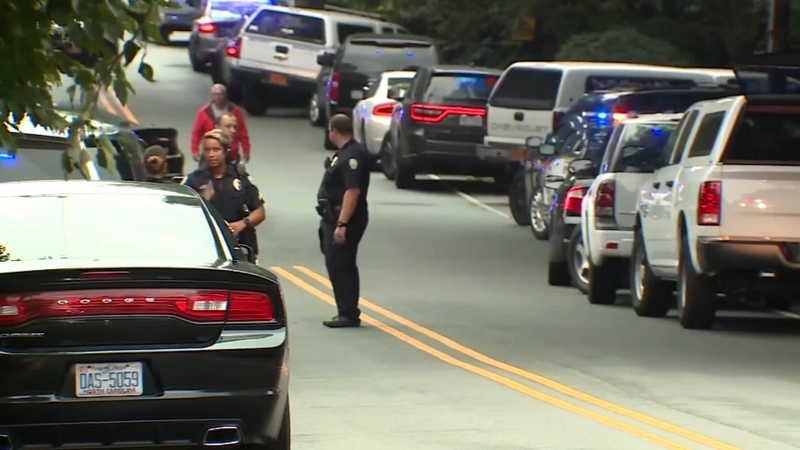 Hours later, the suspect from the shooting was arrested without incident, the sheriff's office said.

The suspect was believed to also be a student but officials did not immediately release any other details.

Winston-Salem Police Chief Catrina Thompson confirmed at a news conference Wednesday afternoon that a student had been shot and taken to the hospital, where he died from his injuries.

Forsyth County Sheriff Bobby Kimbrough Jr., who joined deputies and officers at the school on the initial call, identified the victim as William Chavis Raynard Miller Jr. but did not know his age.

Thompson fought back tears as she delivered the news that Miller had died despite life-saving efforts at the school and at the hospital. She also said that as a result of the shooting trauma, at least one student suffered a seizure and needed medical attention.

The student killed today in the shooting at Mt Tabor HS is William Chavis Raynard Miller Jr. Our thoughts and prayers are with his family today and in the difficult days to come.

Kimbrough, too, was emotional.

"I haven't cried in a while, but I've been crying since I left the hospital," Kimbrough said.

Kimbrough said he spoke to Miller's mother at the hospital and promised her he would get to the bottom of the investigation.

Kimbrough asked for the public's prayers for the community.

Thompson added: "We have a mother and family who will not be able to hug their child tonight."

The Winston-Salem school was on lockdown and students were moved after the incident.

Police blocked roads to the school, which has an enrollment of more than 1,500 students, and numerous emergency vehicles were on the scene. Parents frantic for information parked their cars on the sidewalks several blocks from the school as police directed traffic away from campus. Students and parents could be seen walking toward a nearby shopping center.

Christopher Johnson said his son told him that he heard the gunshots while in the school gym and students were told to hide because there was an active shooter on campus.

"You see stuff like this in the media," said Johnson, whose son was still at the school awaiting transportation to a pickup point. "It's scary to know that it actually reached out and touched you this time. My son's not a victim, but he's part of this and he'll probably remember this forever."

The Mayor of Winston Salem, Allen Joines said earlier in the day that the situation was an "evolving event."

"This is still an evolving event therefore it is not appropriate to offer detailed comments at this time," Joines said. "That being said, we are deeply saddened by the event at Mount Tabor Senior High School. Our thoughts and prayers are with the student who was injured".

A shooting has happened at Mount Tabor High School, according to the Forsyth County Sheriff's Office.

A large law enforcement presence, as well as medics, were seen outside the school shortly after noon.

Scanner traffic from Broadcastify.com captured the moments when officers were trying to find a rescue team to go inside the building and provide aid to the student who was shot.

The City of Winston-Salem told parents of Mount Tabor students not to go to the school for student pickup.

Law enforcement and school officials are still working on reuniting parents and students. This process is taking a while. Grief counselors are available upon pickup at the reunification location. Please be patient. pic.twitter.com/jp7Wb2Giyz

The city told parents to stage at the Harris Teeter Shopping Center on Peace Haven Road and await further instructions.

The sheriff's office initially said all students were being transported to the Robinhood Family YMCA, but then said parents should report to Harris Teeter to be reunited with their children.

The sheriff's office said there was a "disturbance" in the area of the Harris Teeter, but there was no confirmation of a second shooting. No injuries were reported at the staging area.

Parents of Mount Tabor High School students: Do not go to the school for student pickup today. Stage at the Harris Teeter Shopping Center on Peace Haven Road and await further instructions. pic.twitter.com/Fpg0a1Fm5m

The sheriff's office also said that many other schools in the area were also on lockdown out of "an abundance of caution." There were no incidents reported at any other schools.

"I want to extend my sympathy and prayers to the family of our deceased student and to all students, staff, and parents at Mount Tabor, who have had to endure the unthinkable today," McManus said. "Please know the entire district is with you."

Counselors and the school system's crisis team will be available at an offsite location for parents, students, and staffers.

"I want to thank parents across the district for their patience and understanding during our preventative lockdowns, which were done out of an abundance of caution and to assist our law enforcement partners with their investigation," McManus said. "I know how awful it must have been to be separated from your children during this incident, and I am sure that you held your children tighter when they arrived home this afternoon."

This is the second school shooting in North Carolina this week. On Monday, a student was shot at New Hanover High School in Wilmington. A 15-year-old was charged in that incident.

"For the second time this week, we have seen a shooting in a North Carolina school," Gov. Roy Cooper said in a tweet. "Our prayers are with the victims, their families and all the students ... I have been briefed by law enforcement and the Department of Public Safety is ready to provide any support necessary. We must work to ensure the safety of students and educators, quickly apprehend the shooter and keep guns off school grounds."

US Sen. Richard Burr, R-NC, said he was "saddened" to learn about the incident.

"I'm deeply saddened to hear of the passing of a Mount Tabor High School student this afternoon," Burr said. "I commend local law enforcement and first responders for their quick and ongoing efforts to keep our community safe. My prayers are with the students and faculty during this time."

"I am deeply saddened to learn of the tragic death of William Chavis Raynard Miller, Jr. today in Winston-Salem," Hairston said. "Only days into the school year, another senseless act of gun violence has resulted in the loss of a child's life. The United States stands ready to work with our law enforcement partners to investigate and bring justice for this victim and his family. We must, together, find ways to put an end to the epidemic of gun violence in our schools."

The sheriff's office said Wednesday evening that it would hold another news conference Thursday morning. Cooper and others are expected to attend.