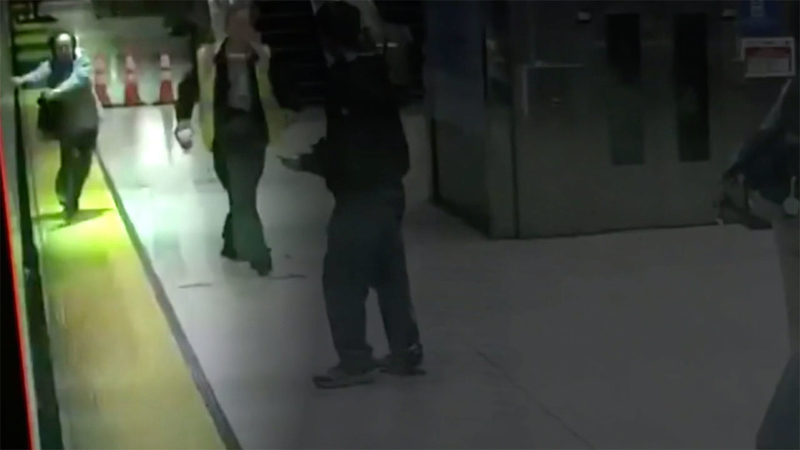 Woman dragged by train after getting hand caught in door: VIDEO

SAN FRANCISCO -- Officials in San Francisco are promising a full investigation after a frightening video was released showing a woman getting her finger caught in a closing train door and dragged onto the tracks under the train.

In the surveillance video, the woman can be seen walking down the stairs at the city's Embarcadero station on April 12 when she tries to get on the Muni train as the doors are closing. It appears as though her hand gets stuck in the door as it is closing. She can be seen talking to an employee standing on the platform just feet away, but the train starts moving and she is dragged off the platform and under the train.

The woman was reportedly injured, but officials have not said how seriously.

The video was first acquired by the San Francisco Examiner.

"The door closed with less than a half an inch of space between the door and the door jam when she reached her hand in the door," Paul Rose, San Francisco Municipal Transportation Agency spokesperson, said in an interview with San Francisco ABC station KGO.

The SFMTA, which operates the train line, recently purchased new Muni train cars, including the one involved in the accident.

"These trains, and doors are safe," Rose said. "They operate as designed, they were certified by CPUC [California Public Utilities Commission] and they've gone through six months of tests before we put them in service."

The CPUC has said it will investigate the doors and the pin system, according to KGO.

"I heard shouting behind me, and I didn't know what was going on, but there was a commotion and I was scared honestly," eyewitness Will Hayworth told KGO. "She was trying to keep up with this train and this new Muni car was dragging her by her hand. ... People were shouting, 'Stop!' and a couple of people were banging on the car even, shouting 'stop, stop, there's somebody trapped.'

"She was keeping up, but still being dragged," he continued. "The car didn't slow down at all. Basically, it didn't seem like the operator had any idea of what was happening."

Matt Haney, the supervisor from San Francisco District 6, which includes the Embarcadero region, said this is not the first time he's heard complaints about issues with the doors -- including from SFMTA employees.

"There clearly needs to be some different sensors on the doors or some way for riders to be able to see it in a different way," Haney said. "My understanding is that some of the operators actually flagged that this was an issue and they were concerned about it."