The Ingenuity helicopter has successfully completed its historic flight on Mars and safely landed back on the surface, according to NASA.

The first powered, controlled flight on another planet took place at 3:30 a.m. ET.

The little rotorcraft that could.🚁💨

Ingenuity documented its historic ascent today. Here's the #MarsHelicopter's POV during first flight. That's its shadow on the ground below. pic.twitter.com/wXgLyTDbjm

Unlike when the helicopter's fellow traveler, the Perseverance rover, landed on Mars on February 18, there was a bit of wait to know how the helicopter fared in its attempt.

The helicopter team was in mission control at NASA's Jet Propulsion Laboratory in Pasadena, California, early Monday morning to receive and analyze the first data from Ingenuity's flight attempt.

You wouldn’t believe what I just saw.

The flight was originally scheduled for April 11 but shifted after a command-sequence issue was discovered when the helicopter went through a system of preflight checks with its software.

Ingenuity conducted a high-speed test of its rotors on April 10, but the command sequence ended early due to a watchdog timer that expired. This early end of the test happened when the helicopter was trying to shift the flight computer from preflight into flight mode.

The helicopter team determined a command sequence tweak fix that will alter the timing when the helicopter's two flight controllers start up. This should ease the transition from preflight to flight for both the hardware and software.

This tweak was chosen rather than modifying and reinstalling the existing flight control software, which is the backup plan if the tweak doesn't allow for a successful takeoff.

The helicopter team received data on April 16 showing that the helicopter successfully completed its rapid spin test after employing the tweak.

The chopper autonomously flew through the thin Martian atmosphere, with no help from its teams on Earth. 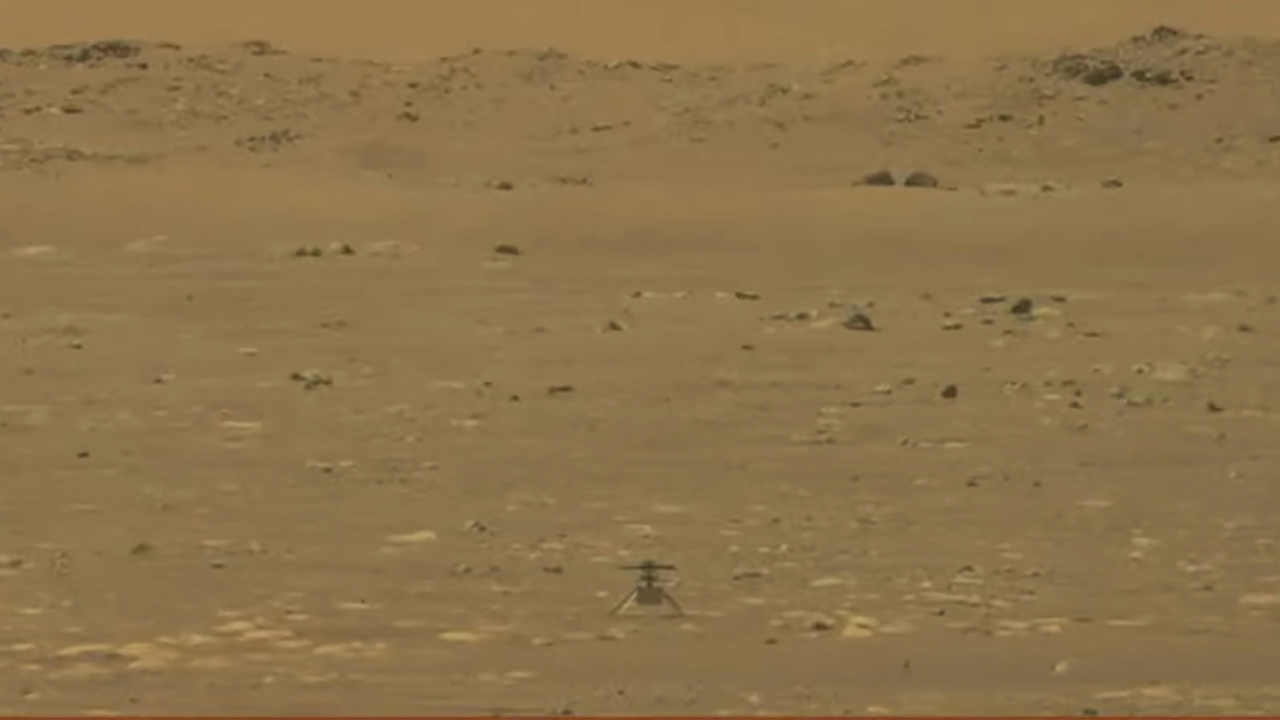 In this image from NASA, NASA's experimental Mars helicopter Ingenuity lands on the surface of Mars Monday, April 19, 2021.

"We can now say that human beings have flown a rotorcraft on another planet," said MiMi Aung, Ingenuity project manager at JPL "We've been talking about our Wright Brothers moment on another planet for so long. And now, here it is."

Ingenuity, which is a technology demonstration, flew for about 40 seconds total on Monday. The 4-pound helicopter spun up its two 4-foot blades, rose up 10 feet (3 meters) in the air, hovered, took a photo, and touched back down on Mars.

Ingenuity could fly up to four more times over the coming weeks.

The little helicopter has checked off multiple milestones so far, like wiggling its blades and surviving the freezing cold nights on Mars.

"Mars is hard not only when you land, but when you try to take off from it and fly around, too," Aung said. "It has significantly less gravity, but less than 1% the pressure of our atmosphere at its surface. Put those things together, and you have a vehicle that demands every input be right."

During the helicopter's hover, it captured images 30 times per second to feed into the navigation computer. This made sure Ingenuity remained level and in the middle of its 33-by-33-feet (10-by-10-meter) air field.

Ingenuity used a second higher-resolution camera pointing toward the horizon to capture images each time the helicopter is aloft.

Once the helicopter landed on Mars, it sent back data through the rover to Earth.

Lower-resolution black-and-white images from the helicopter's navigation camera likely will be available first, followed by the color image the next day. The rover will also send back images and video from several of its cameras. Perseverance has been practicing capturing video of the helicopter as it has tested its blades in recent days.

"The Wright brothers only had a handful of eyewitnesses to their first flight, but the historic moment was thankfully captured in a great photograph," said Michael Watkins, director of JPL, in a statement. "Now 117 years later, we are able to provide a wonderful opportunity to share the results of the first attempt at powered, controlled flight on another world via our robotic photographers on Mars."

That first black-and-white image from the helicopter's navigation camera is key because "that will help us localize where the helicopter landed," said Tim Canham, Ingenuity operations lead at JPL.

Grip, the chief pilot for Ingenuity, will be analyzing the first data returned from the helicopter to determine if it lifted, hovered, rotated and landed successfully.

"The primary purpose of this project is to get that detailed engineering data that we can see the performance of the vehicle, and then that data can be used by future projects to make even bigger and better helicopters," Canham said.

"From day one of this project our team has had to overcome a wide array of seemingly insurmountable technical challenges," Aung said. "We got this far with a never-say-die attitude, a lot of friends from many different technical disciplines, and an agency that likes to turn far-out ideas into reality."

After the first flight, Ingenuity will get a "rest day" to charge up using its solar panel. The team will use data sent back by the helicopter that week to plan its next flight.

The cadence between flights will get progressively shorter. Ingenuity could fly four days after the first flight, then three days after the second flight and so on. The latter flights could see the helicopter rising as high as 16 feet (5 meters) and performing lateral movements up to 50 feet (15 meters) out and back.

"Once we get to the fourth and fifth flights, we'll have fun," Aung said. "We really want to push the limits. It's not every day that you get to test a rotorcraft on Mars. So we want to be very adventurous."