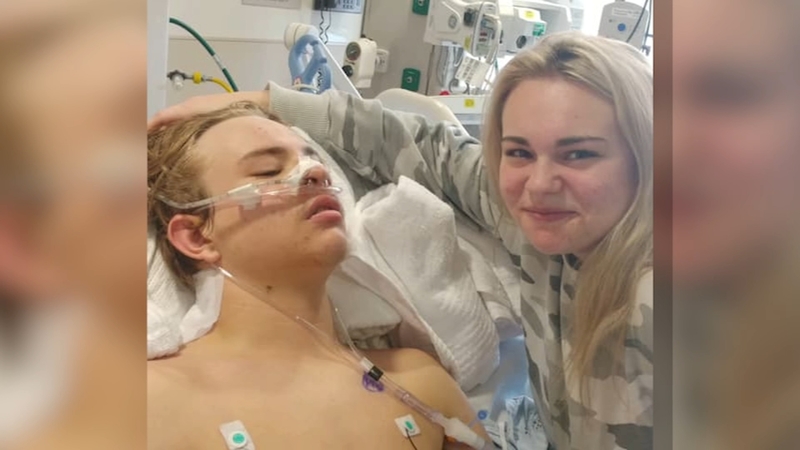 His sister, Samantha Clifton, said she admired him.

"He's one of the strongest people I ever met," Samantha Clifton said.

But now, Samantha's brother is in recovery at WakeMed following a terrible car crash on Jan. 2.

A Johnston County 17-yr-old is fighting for a return to normalcy after a terrible accident left him paralyzed. His parents and sister spoke with me about the love and support they’re receiving from around the world through GoFundMe. Here’s the link: https://t.co/5JEHJsXhQj pic.twitter.com/ftTk6GeBS9

Nathan was driving home when he lost control of his truck, veered off the road and hit a ditch, before coming to a stop on an embankment. The crash happened on Davis Homestead Road in Johnston County. Nathan's father, Leon Clifton, said his son always wears a seat belt and when EMS crews found him partially out of the car, he believed it was because his son tried to free himself from the vehicle.

Crews rushed Nathan to WakeMed where doctors and hospital staff met the family in the emergency room.

Doctors told the family the extent of Nathan's injuries, which included paralysis.

"I realized he didn't have any sensation in his feet," the senior Clifton said. "Now he's going to have to work far harder than he's ever had before. And he'll do it! But it's going to be different."

"It's hard to see my little brother in that situation," Samantha Clifton said. "I want to be able to take the pain away from him."

Doctors released Clifton from the Intensive Care Unit Tuesday and plan to move him to a different area of the hospital.
Samantha Clifton created a GoFundMe with a $5,000 goal to help with expenses.

"We've had responses from folks from Canada, Israel, Italy, Spain. These are folks we don't know personally," Leon Clifton said. "But they have the love from God to know that this young man, or any young man in this situation, needs that support. And that's been truly amazing."

The student-athlete's peers met Monday on the baseball field at North Johnston High School to pray for Nathan. A Facebook live recording showed a group of several dozen students gathered in support.

"Just the love that was coming off that field was amazing," Nathan's mother, Susan Clifton, said. "The amount of prayer that we have coming--we feel it. We so feel God's power here. We feel His love. We feel His arms wrapped around us. We truly do."

The family said it pains them to see their son and brother like this.

"I wanna lay in bed with him. Rub his face and his head and say 'mama's gonna make it better'. But I can't," Susan Clifton said.