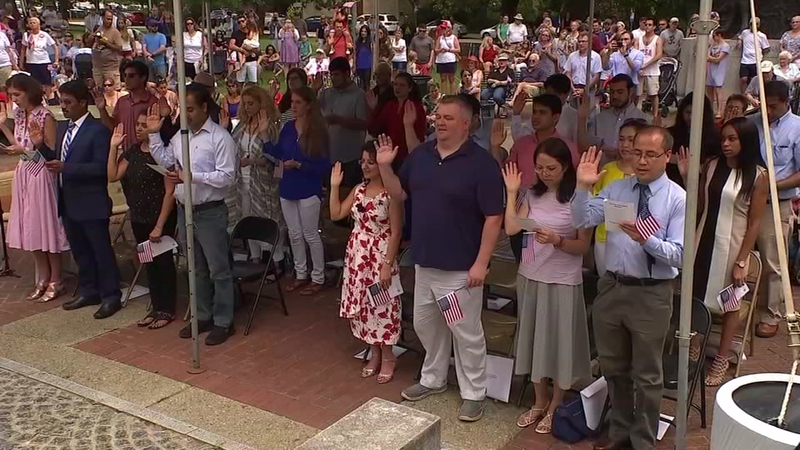 RALEIGH, NC (WTVD) -- It was a scene that definitely could've pleased the Founders: men and women celebrating their independence while pursuing a life of happiness.

Against a backdrop of a flag-draped State Capital in Raleigh, 27 immigrants completed their naturalization and officially became citizens of the United States. The new citizens emigrated from 17 different countries, including China, India, Mexico and Russia, among others.

Noor Alzuhairi, a native of Iraq, says her new American citizenship gives her both humanity and respect.

"In Iraq, it's so dangerous for my family," Alzuhairi told ABC11. "I love America. That's it. I love America and love the people."

The Oath of Citizenship is the last step of the years-long process of naturalization. Alzuhairi first came to the United States in 2013.

According to U.S. Citizenship and Immigration Services, the federal government describes attaining citizenship as a "unique bond that unites people around civic ideals and a belief in the rights and freedoms guaranteed by the U.S. Constitution. The promise of citizenship is grounded in the fundamental value that all persons are created equal and serves as a unifying identity to allow persons of all backgrounds, whether native or foreign-born, to have an equal stake in the future of the United States."

On its website, USCIS says 90 percent of applicants for citizenship are green-card holders (legal, permanent residents) for at least five years, which also means they are ages 18 or older at the time of filing, be physically present in the United States for at least 30 months out of the five years immediately preceding the date of filing the application, be able to read, write, and speak English and have knowledge and an understanding of U.S. history and government (civics), and be "a person of good moral character."

Applicants must also pass a thorough background check, an interview, plus tests in both English and civics.

Once they are approved and fully naturalized as U.S. citizens, people like Alzuhairi will be able to do the following: