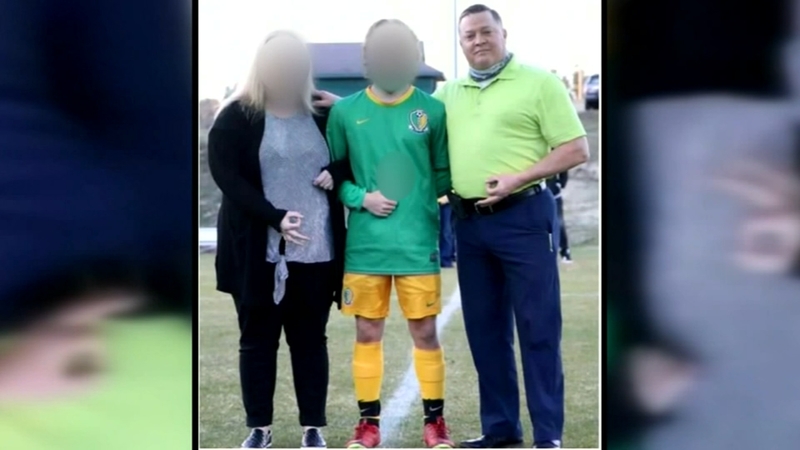 WADESBORO, N.C. (WTVD) -- A North Carolina police officer is under investigation for flashing a white supremacy sign during a Senior Night photo with his son.

Sgt. Thomas Luckey and his wife can be seen in the photo standing next to their son, celebrating his last home soccer match. Luckey and his wife's hands are held in front of their bellies using a gesture that some say has become associated with White supremacy.

The photo is just the latest aggression from Luckey, according to dozens of residents in Wadesboro.

County Commissioner Vancine Sturdivant said there is a long history of racist allegations against Luckey. She said he was recently put on administrative leave after video caught him using racial slurs against young Black men.

"He should have been terminated. It's been going on too long," said Sturdivant.

"Something needs to be done about him. He shouldn't be on the force. His job is to protect and serve, and that's not what he's doing," one Wadesboro woman said.

"Our complaints are falling on deaf ears. We're just helpless or hurt or angry," nurse Tamra Garris said. "But the only thing we can do is deal with it."

Garris said the people who Luckey is supposed to protect and serve don't feel protected at all.

"We aren't asking anything of him other than to live up to the oath you took. And if you can't, then step down from your job, sir, please and thank you," she said.

Richmond County Schools said administrators had spoken to Luckey about the photo. He told them it was a family prank. He denied that the hand gesture was intended to represent white supremacy. He said his family had been playing the circle game for years and this was just another instance of that.

Wadesboro Chief of Police said the active investigation into Luckey was confidential but ongoing and that his department was taking all the accusations against Luckey seriously.
Report a correction or typo
Related topics:
ncwhite supremacistsracismpolice brutalityrace in america
Copyright © 2021 WTVD-TV. All Rights Reserved.
More Videos
From CNN Newsource affiliates
TOP STORIES