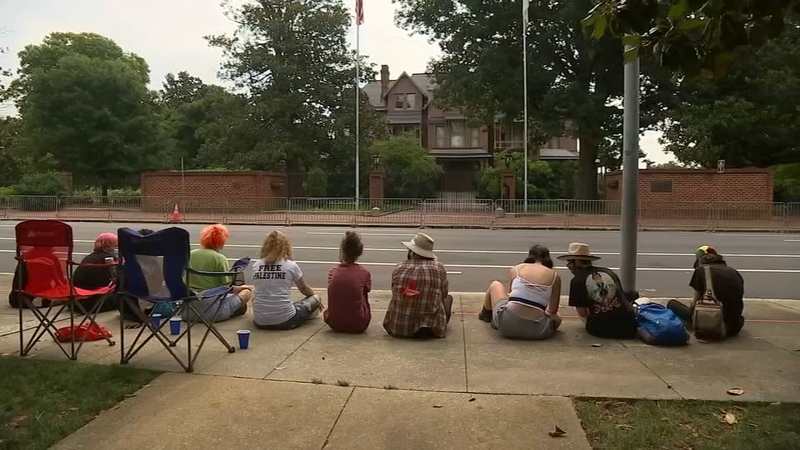 RALEIGH (WTVD) -- Four protesters were arrested outside the North Carolina Executive Mansion in downtown Raleigh on Tuesday after police said they spray painted the street while demonstrating against recent legislation they feel could hide critical information from the public.

Protesters told ABC11 crews the focal point of the demonstration was Senate Bill 168.

It's currently sitting on the governor's desk after being passed almost unanimously be Democrats and Republicans in the General Assembly.

The bill contains a lot of technical information about health regulations and psychiatric care.

The two sentences in the bill that are provoking a reaction from some have to do with death investigations involving police and prisons.

Generally, those investigations are confidential when they're still in the hands of police. They can them become public when law enforcement transfers that evidence or report to the medical examiner's office.

State officials say they want to streamline the system and keep everything confidential until the medical examiner's office is finished with everything.

Then the medical examiner could either choose to make things public record or potentially go to court if a news outlet requests that it be released.

Officials say there's nothing nefarious about the bill but protesters have been suspecting otherwise.

"So whatever happens to people once they're detained by police or once they're in jail, then these records are no longer public," protester Taali Coleman said. "Then it makes it very difficult to fight for justice in the confines of those areas."

The bill doesn't explicitly state or indicate that but people across the country have been worried about transparency when it comes to police records, especially after the death of George Floyd.

Rapper Ice Cube tweeted about the bill on Monday. "This is so dirty," the tweet read. "You know most crooks do their crimes after midnight. Governor Cooper do not sign this into law. Don't give more cover for Killer Cops."

This is so dirty. You know most crooks do their crimes after midnight. Governor Cooper do not sign this into law. Don’t give more cover for Killer Cops. https://t.co/ymW55POPNV