How can you be sure you're signed up for the NC vaccine lottery? 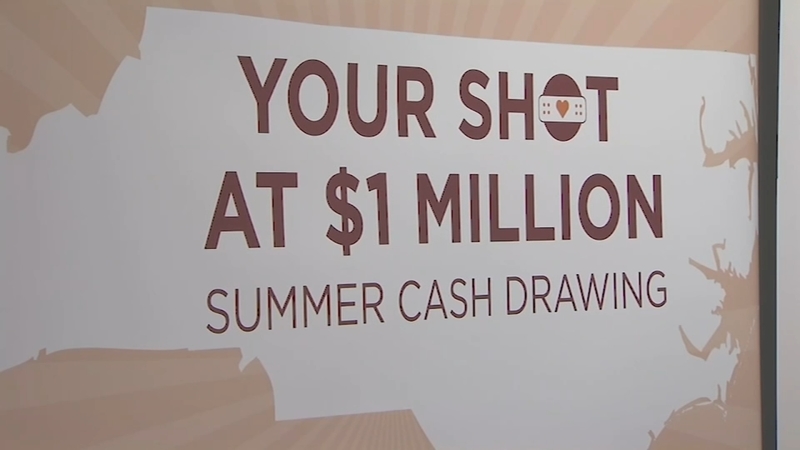 How can you be sure you're signed up for the NC vaccine lottery?

RALEIGH, N.C. (WTVD) -- The second vaccination lottery drawing is next week so you still have time to get your shot for a chance at a million dollars or college scholarship money.

If you've already had your shot, the state says you are automatically entered.

But how do you know for sure?

An ABC11 viewer reached out after she couldn't find any information showing her family was entered.

Williams said neither was her husband who, as an Army reservist, had to get the vaccine from the Department of Defense.

She said, although they know the odds of winning a million bucks for their family or a college scholarship for their daughter were slim, they were better than the regular national lotteries.

"The odds are definitely more in your favor to win when you're only competing against people in your state that have been vaccinated," Williams said.

They were disappointed when it appeared they weren't signed up for the drawing.

But confusion among those who have been vaccinated is not unusual, according to the state Department of Health and Human Services.

That's especially true if, like Williams and her daughter, they were vaccinated in the Federal Retail Pharmacy Program at national chains like Walgreens and CVS or the State's Indian Health Service.

"They give us that data through a different portal, so you can't access directly," said State Health Director Dr. Betsey Tilson.

Williams was happy to hear that.

"Hopefully, it's true since we have no way to verify it," Williams laughed. "Makes me still a little bit nervous."

But last week's vaccine lotto million-dollar winner is evidence that people such as Williams and her family are registered, according to Tilson.

"Our first drawing winner was vaccinated at Walgreens at a federal pharmacy program and even though that person couldn't access directly their vaccine records from CVMS, we know for sure that data went back in," Tilson said.

NCDHHS said that despite efforts by the state, the Department of Defense hasn't shared information on members of the military vaccinated in North Carolina.

That means Williams' husband is not eligible.

"If anyone deserves to be in the lottery it's definitely our nation's soldiers. So it's a little sad, but I understand there's legalities that get in the way of that," Williams said.

If you were not vaccinated under the Federal Retail Pharmacy Program, you should have gotten an email with the subject line "Welcome to the North Carolina COVD-19 Vaccine Portal."

If not, call the vaccine provider and make sure they sent your email address to the state.