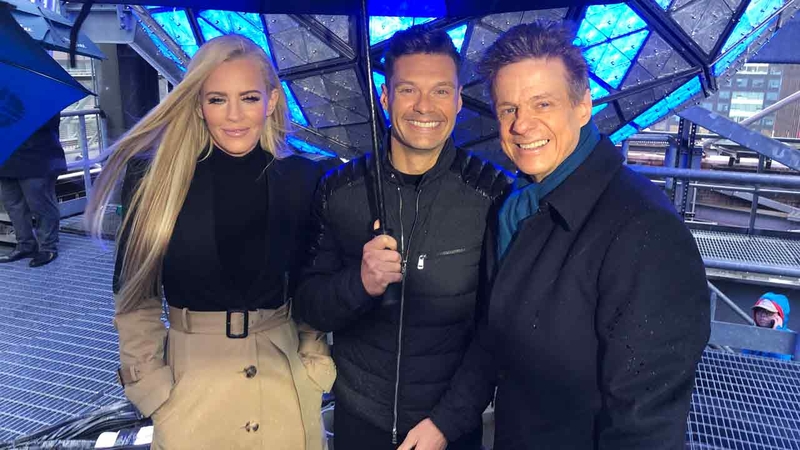 NEW YORK CITY -- Rain that's in the forecast for Times Square this New Year's Eve is not going to prevent the ball from droppin' - or New Year's Eve from rockin' say hosts Jenny McCarthy and Ryan Seacrest.

"It adds to the story," Ryan insists. "It becomes a character in the whole narrative. And so I think it adds to the performers' anxiety a little bit more than our's, really."

Jenny was quick to agree. "Oh, absolutely!" she told me. "I can't imagine trying to sing. But for us, it definitely gives us another element."

An element of unpredictability is part of what makes this broadcast worth watching - though it can prove perilous for the reputation of a performer, as Mariah Carey discovered two years ago.

She returned to redeem herself last year, but she won't be back this time.

"It's a high pressure gig," I noted to both hosts as we stood in the driving rain atop the building where the ball will drop.

Ryan agreed, telling me that he says to all of the artists before they do it for the first time, "It really is unlike any other performance."

In the case of Donnie Wahlberg that proved literally true, when he met McCarthy on this show and later married her.

Tonight, he's back with his group New Kids On The Block. His wife, Jenny, predicts, "It's gonna be very sentimental."

Christina Aguilera is another musical act who will have to brave the elements.

And as challenging as that will be, the hosts prefer rain to last year's near-record cold.

Jenny hung in there, thanks in part to a great tip from Ryan, which was "to take the heat warmers and heat up our cheeks because our mouths were frozen."

Ryan noted that during the commercial breaks, "We really had to warm our cheeks up."