4 family members among 5 killed in I-95 crash 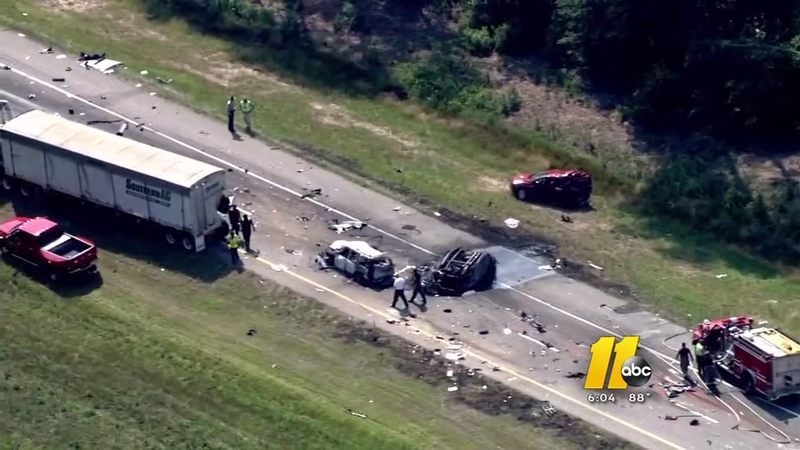 Latest details on the deadly I-95 crash

The crash shut down both directions of I-95 for almost 12 hours near Exit 10 in Robeson County - which is just north of the South Carolina border.

Pictures from Chopper 11 HD showed there were at least 3 tractor-trailer trucks and 3 smaller vehicles involved.

The North Carolina Highway Patrol said the driver of a tanker truck failed to slow down for some highway construction around 1 p.m., causing a rear-end chain reaction.

Fuel from the crashed vehicles caught fire. The flames and spreading gasoline then ignited other vehicles. The main trailer of the tanker with some 8,000 gallons of fuel on board did not ignite.

The driver of the tanker truck, identified as 68-year-old Michael Elliott Bricker of Myrtle Beach, was killed.

The others killed were all members of a Goose Creek family in one vehicle:

The flames spread across the grass of the median and shoulders and then into nearby wooded areas leaving a huge burned area visible from the air.

Troopers said late Tuesday that three of the seriously injured were flown by helicopter for treatment. Forty-six-year-old Javier A. Estrada-Beltran, 35-year-old Francisco Morales-Gaspar, and 34-year-old Lucia De-La-Cruz - all of Charleston - were described as stable at UNC-Chapel Hill.

Two other drivers were checked out at the scene by EMS workers and not taken to the hospital.

Interstate 95 became a road of carnage Tuesday as a wreck left 5 dead and 4 injured.

The crash closed the highway between exits 2 and 10, forcing traffic in both directions to be detoured off the interstate.

The NC DOT said northbound lanes of I-95 were reopened just before midnight and the southbound lanes reopened about an hour later.

What was left of the wreckage was still smoldering Wednesday afternoon.

The wreckage from yesterday's crash that killed 5 including a baby is still smoldering, more than 24 hours later #abc11 pic.twitter.com/viF6CyAEld