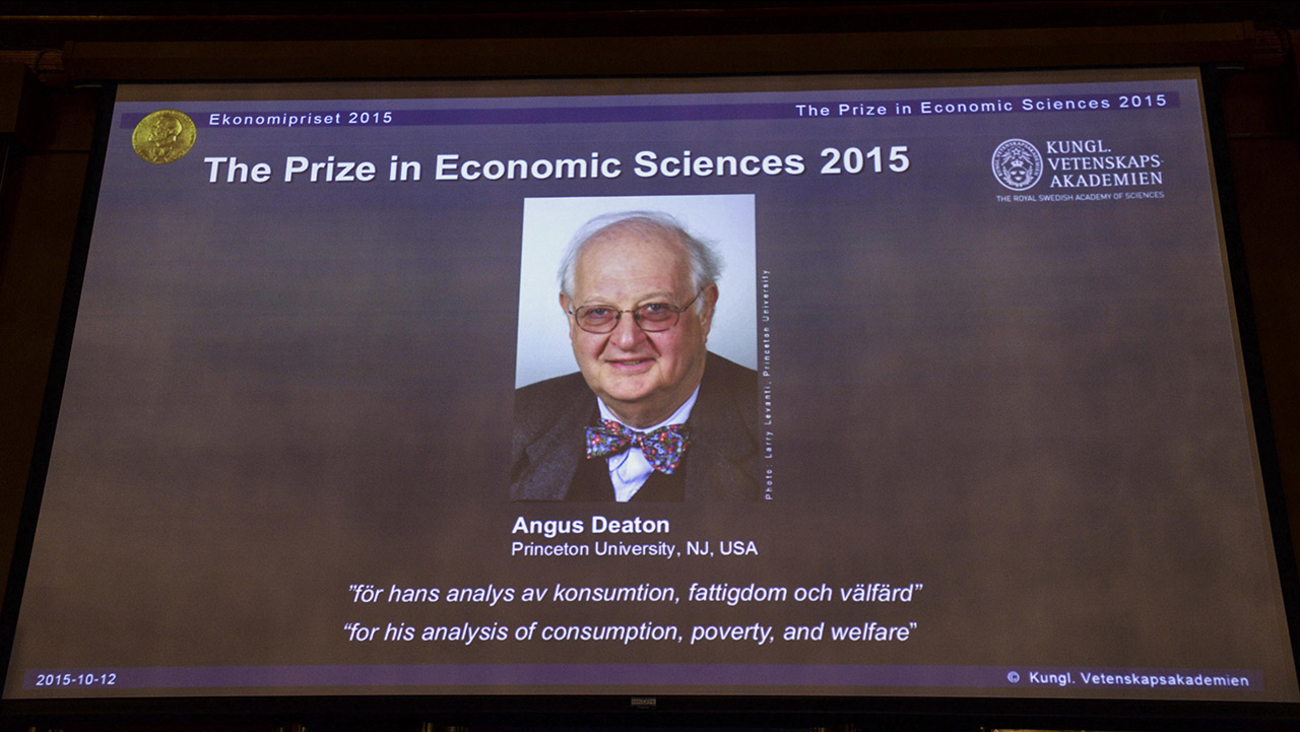 A view of the screen showing an image of Professor Angus Deaton, winner of the 2015 Sveriges Riksbank Prize in Economic Sciences in Memory of Alfred Nobel. (AP)

Each year since 1901, the professors of the Nobel Assembly have awarded the prize to people whose work has benefited mankind. These men and women have made incredible strides in their field -- like finding drugs that help fight malaria and conducting experiments that lead to a better understanding of the universe -- earning them one of the most prestigious awards in the world. 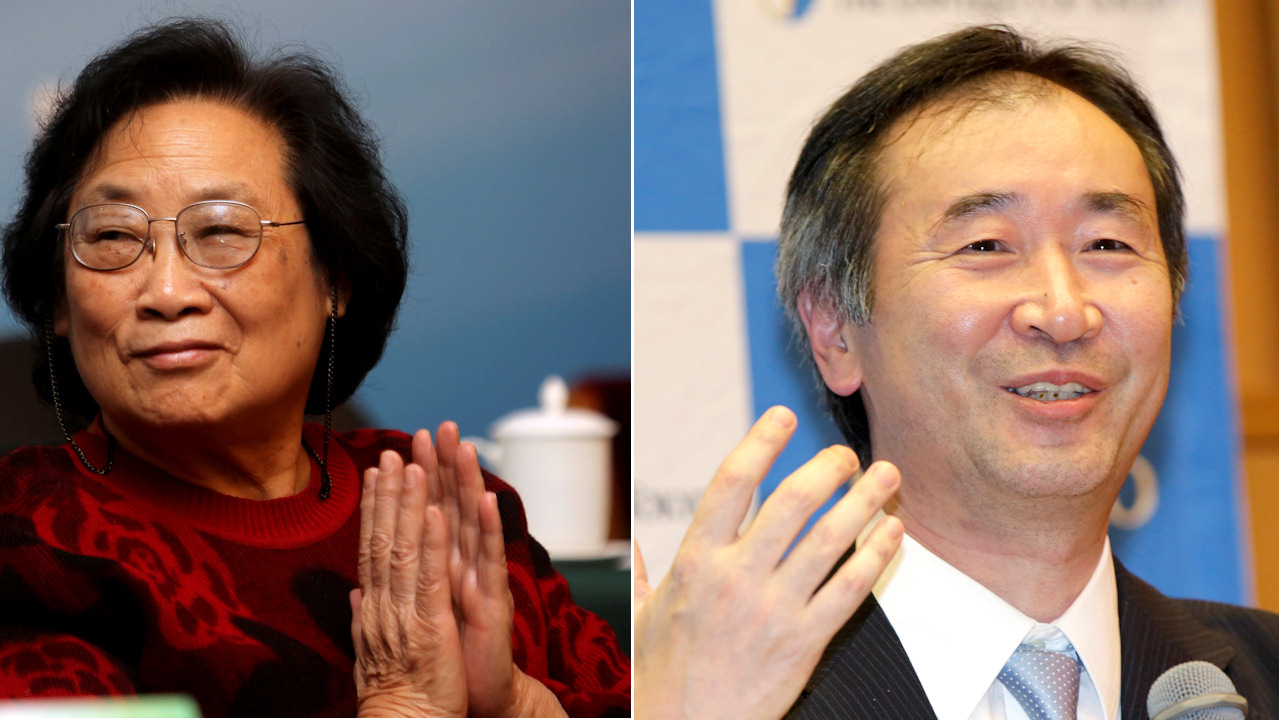 Here's what you need to know about this year's Nobel Prize winners and their accomplishments:

What did he do? Deaton's work has helped redefine how poverty is measured around the world.

Why is it important? Deaton's work has helped governments better understand individual consumption choices and how they impact broader economies. The Nobel committee says the award revolved around Deaton's study of three central questions: "How do consumers distribute their spending among different goods?" "How much of society's income is spent and how much is saved?" and "How do we best measure and analyze welfare and poverty?"

Read more about the The Sveriges Riksbank Prize in Economic Sciences in Memory of Alfred Nobel winner or congratulate the laureate.

A Tunisian man holds up ink-stained fingers after voting in the country's 2014 election.

What did they do? The award goes to a group of four organizations representing four apsects of Tunisian society: the Tunisian General Labour Union, the Tunisian Confederation of Industry, Trade and Handicrafts, the Tunisian Human Rights League and the Tunisian Order of Lawyers. These four groups were crucial in the country's peaceful democratic elections last fall following its 2011 revolution, according to the committee.

Why is it important? Tunisia's was the first and one of the most successful efforts to create a democracy during the Arab Spring Movement. The Norwegian Nobel Committee said that the National Dialogue Quartet was vital to that success.

"The example of Tunisia thus underscores the value of dialogue and a sense of national belonging in a region marked by conflict," the committee wrote, adding that the Quartet's work "shows that civil society institutions and organizations can play a crucial role in a country's democratization."

Read more about the Nobel Peace Prize winners or congratulate the laureates.

Who won? William C. Campbell (Ireland and the U.S.A.) and Satoshi Omura (Japan)

What did they do? They found a new way to combat infections caused by roundworm parasites (nematodes).

Why is it important? Parasitic roundworms can cause all sorts of health problems like malnutrition, infection and disease, and it's found throughout the world, the National Institutes of Health explains. The new drug has already "radically lowered" the rate of some of these health problems, according to the Nobel Assembly.

What did they do? She discovered a better way to treat malaria.

Why is it important? The drug Youyou discovered has "significantly reduced the mortality rates for patients suffering from malaria," the assembly explained.

What else should I know? She is the first Chinese woman to win a Nobel Prize.

Read more about the medicine award or congratulate the laureates.

BREAKING NEWS The 2015 #NobelPrize in Physics to Takaaki Kajita @UTokyo_news_en and Arthur B. McDonald @queensu pic.twitter.com/ipvzm0EEFN

Who won? Takaaki Kajita (Japan) and Arthur B. McDonald (Canada and the U.S.A.)

What did they do? Their experiments led to the discovery that neutrinos -- a type of sub-atomic particles -- have mass.

Neutrinos: “The most ubiquitous particles in the Universe, & most mysterious.” http://t.co/d5AZlJVHJN #NobelPrize pic.twitter.com/MIz1iQVuWe

Why is it important? Though they're tiny, neutrinos are extremely pervasive -- they're found everywhere from the sun to inside your body. Because these particles are so abundant, understanding them helps our understanding of how the universe expands, BBC News explains.

What did they do? Before these men came along, scientists believed that DNA was very stable. Lindhal disproved that, while Sancar and Modrich made important discoveries about how DNA defects can lead to cancer.

Why is it important? Their discoveries have provided a better understanding of how our DNA changes throughout our lifetime. This knowledge is essential for creating better cancer treatments, among other uses.

BREAKING NEWS The 2015 #NobelPrize in Literature is awarded to the Belarusian author Svetlana Alexievich pic.twitter.com/MABhwFJ8Lu

What did they do? As a journalist, Alexievich has spent decades interviewing and writing about Soviet and post-Soviet individuals and their experiences in, for example, the Chernobyl disaster.

Why is it important? Danius said in addition to covering an important population, Alexievich has devised a new genre as a journalist writing in a literary style.

The laureates will travel to Sweden in December to receive their prizes.