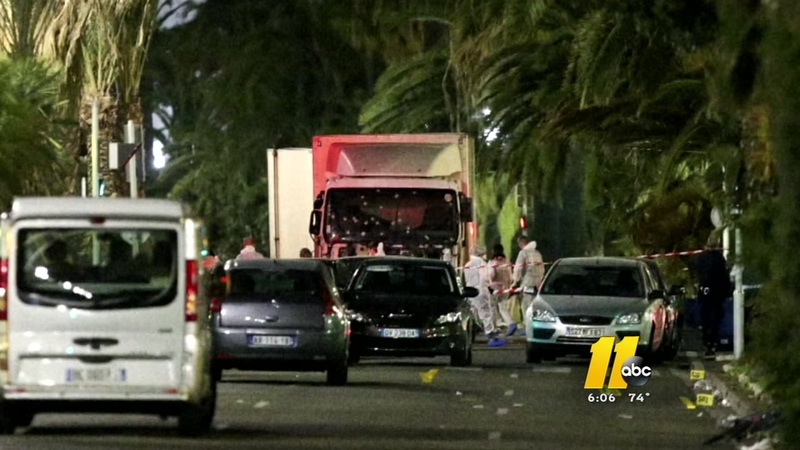 This analysis published with the permission of the author, David H. Schanzer, professor at the Sanford School of Public Policy and director of the Triangle Center on Terrorism and Homeland Security at Duke University. The views, opinions and positions expressed by the author and those providing comments are theirs alone, and do not necessarily reflect the views, opinions or positions of ABC11.

Watch the video below for a full interview with David H. Schanzer

Hard Questions, Unsatisfying Answers
by David H. Schanzer
Why was France attacked again - the third major attack in 18 months?
The problem in France has been brewing for decades, it will take a long time to turn around. There is a large population of deeply disaffected second or third generation Muslim immigrants, some of whom have been involved in low level crime and spent time in jail. They are dissatisfied with their lives and latch on to the ISIS ideology as a way of giving voice to their grievances. They convince themselves that mass violence against westerners and dying in the process gives glory, notoriety, and meaning to their lives.

Why can't French authorities prevent these attacks?
France just successfully held the European soccer tournament, so they have demonstrated the ability to provide strong security at large public gatherings. It is just very difficult to stop an individual willing to kill himself who does not have connectivity to networks of other terrorists and criminals and effectively hides his planning. It appears that the driver of the truck fits this description, but it is still early in the investigation.

What does France need to do to prevent additional attacks?
Intelligence, counterterrorism, and law enforcement have been under-resourced in France for some time. This is changing since the attacks in Paris, but it takes time to turn things around. France has been in a state of emergency for six months that has allowed more raids and arrests with a lower threshold of evidence. So it is not a matter of legal authority, but rather building the capacity to meet the magnitude of the threat. And even then, individuals without connections to known extremists or a record of travel to Syria can fly under the radar and do grave damage.

Should this attack lead to a change of policy by Western nations against ISIS?

Simplistic calls for more bombings won't speed the fight against ISIS. The air campaign has been proceeding for almost two years - obvious, legitimate military targets are being hit and hit hard already. The strategy of supporting and partnering with local forces like the Iraqi Army and Kurdish peshmerga in Iraq and Syria makes sense, but is not moving at the pace that we would desire. As the local forces are doing more, we are adding greater levels of support - indeed Secretary Carter announced an additional 500 U.S. troops are going to the region to provide more training and support to this effort. Defeating ISIS's "caliphate" in Iraq and Syria is necessary, but will not necessarily end the terrorist attacks against the west, as ISIS will continue to exist as a movement and operate more like a global terrorist network in the future than the pseudo-state it is now.


Is America vulnerable to the type of attacks we have seen in France?
The problem in France is much larger in scale and more deeply engrained than the United States. Unlike in France, Muslim immigrants to the United States are, by and large, well integrated, happy with their lives here, and prospering. So the pool of individuals that might be attracted to the ISIS ideology is much smaller. We also have well-resourced and effective domestic intelligence collection and law enforcement agencies. That said, in a large country of 320 million people, individuals or pairs of individuals who are disaffected from American life and are angry and dissatisfied for any variety of reasons can still latch on to the ISIS ideology and choose to engage in violence as we have seen in San Bernardino and Orlando.