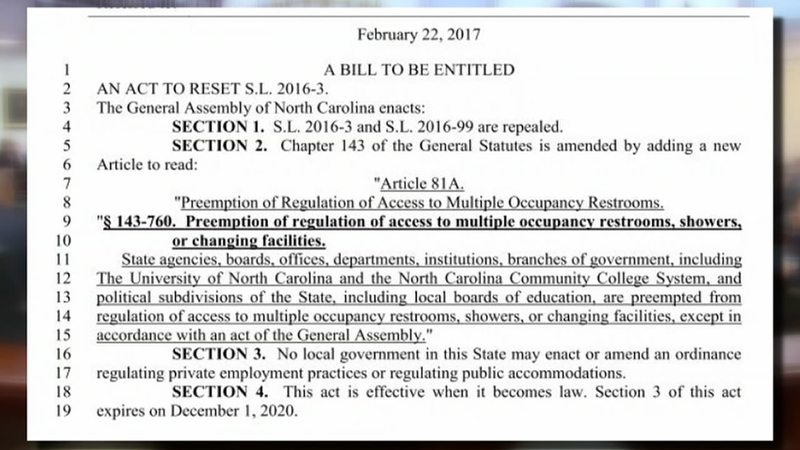 RALEIGH, North Carolina (WTVD) -- Like Luke Maye's game winning shot to get UNC into the Final Four, the passage and signing of House Bill 142 saves the season, or rather many seasons, for North Carolina.

The rollback of controversial bathroom provisions and other clauses of House Bill 2 may indeed alleviate the concerns of the NCAA as it soon schedules tournament locations for the next several years. North Carolina cities and universities submitted 133 bids for tournaments through 2022, with an estimated economic impact of $250 million.

The Greater Raleigh Sports Alliance (GRSA) says 57 of those bids are in in Wake County for academic years 2018/19 through 2021/22, totaling $30 million in projected economic impact.

What's unclear, however, is if HB142 - which still imposes a moratorium on changes to non-discrimination ordinances until 2020 - will meet the standards of other musicians, conventions, and companies that balked at North Carolina.

"It was such an extreme law that was put in place," Justin Miller, a Raleigh small business owner, lamented to ABC11 describing HB2. "[With HB142] we're just kind of backing out of it halfway."

Miller added that his web startup company lost investments from venture capitalists like Google Ventures because of HB2.

"This is case where it's very black and white. [HB2] needs to be removed completely."
Also unknown is if HB142 meets the standards of Bruce Springsteen, Boston, Ringo Starr and Pearl Jam, which all canceled concerts in North Carolina because of HB2.

The Greater Raleigh Convention and Visitors Bureau (GRCVB) also reported the loss of 24 meetings, conventions and sporting events in Wake County as a result of organizers protesting the bill. These events would have filled and estimated 24,500 hotel room nights and earned $8.5 million in projected economic impact to the county.

From another perspective, the rollback of HB2 meant the removal of important definitions of gender, identity, biology, and social norms.

CLICK HERE FOR A STATEMENT FROM THE NC VALUES COALITION