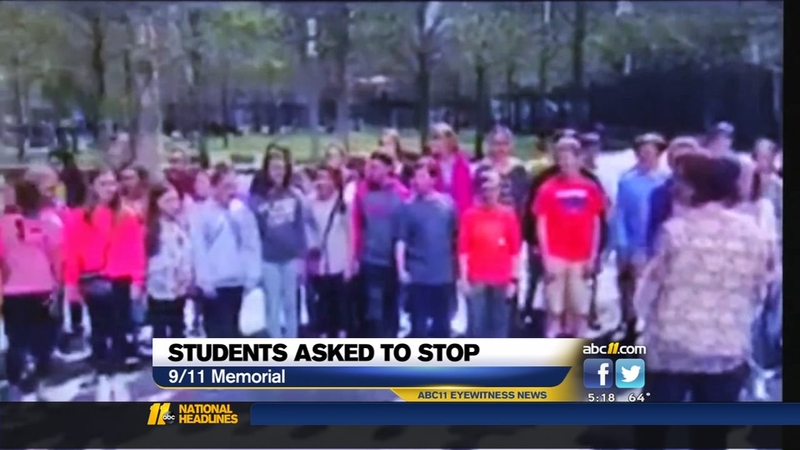 WAYNESVILLE, N.C. -- A North Carolina community is outraged after a local children's chorus is ordered to stop singing the National Anthem.

WLOS reports the incident happened while the Waynesville Middle School chorus was visiting New York City as part of an educational trip.

The group was singing outside of the 9/11 Memorial when they were asked to stop midway through the performance.

According to the 9/11 Memorial's website, groups wanting to perform first must get a permit. The Waynesville students didn't have a permit but did get a verbal okay from a security guard.

"Basically, they performed approximately half of the National Anthem, and they were told by security to cease and desist. And they, of course, complied immediately," said Waynesville Middle School principal Trevor Putnam.

He added that security "explained to them that they treat that (area) as a burial site."

Someone on the trip posted the video of the performance on Facebook and others immediately started commenting and sharing. Many say the students shouldn't have been interrupted.

"I think it's terrible, being a veteran of such," said Bill Bright.

Putnam calls in an unfortunate situation. "I hate that our kids didn't get to finish," he said.

However, he said he's proud of the students making their mark in New York, just as they do in the mountains. "If I'm having a bad day at school, I will go by there and listen to them sing. They have angelic voices and I love to hear them sing."

Waynesville is about 30 miles west of Asheville.