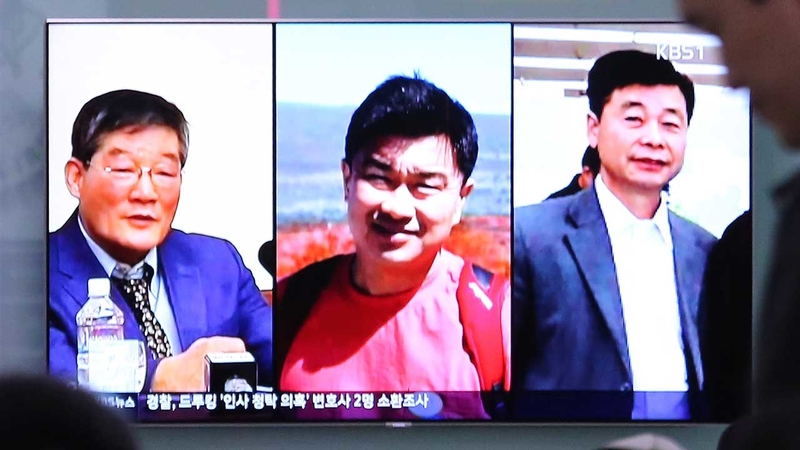 Who are the detainees released by North Korea?

President Donald Trump on Wednesday announced that three Americans who had been detained in North Korea, Kim Dong Chul, Tony Kim and Kim Hak Song, are now on their way home.

Here's what we know about the newly released men:

Kim was detained the longest of the three, having spent at least 900 days in custody. Born in South Korea, Kim has U.S. citizenship and has lived in Virginia.

In 2015, Kim was arrested on suspicion of colluding with a South Korea spy agency. The agency denied any involvement with Kim.

Kim publicly apologized during a press conference. In the past, other detainees have said that their similar apologies were given involuntarily and under duress. In 2016, Kim was sentenced to 10 years of hard labor.

Prior to his arrest, Kim ran a business in the country's Rason Special Economic Zone, according to state media. He has also worked as a pastor, ABC News reports.

Kim was detained last year and charged with "hostile acts" toward the government, but it is not known if he was ever formally convicted and sentenced.

Kim, who graduated with a masters from the University of California, Riverside in 1990, works as a professor and has made several trips to North Korea to teach. He was working as an accounting professor at Pyongyang University of Science and Technology when he was detained. The school, which is the only privately funded college in the country, said that his employment was not related to his arrest.

Kim was arrested when he was at the Pyongyang airport on April 22, 2017, accompanied by his wife. His wife was allowed to leave the country.

After Kim's release was announced, his family issued a statement through their lawyer.

"We want to thank all of those who have worked toward and contributed to his return home. We also want to thank the president for engaging directly with North Korea. Mostly, we thank God for Tony's safe return," the statement said. "We appreciate all of the support and prayers of friends and even strangers during this challenging year. You are dear to our hearts. We ask that you continue to pray for the people of North Korea and for the release of all who are still being held."

Kim Hak Song was also an employee at Pyongyang University of Science and Technology before he was detained.

Kim, also a U.S. citizen, worked on an experimental farm run by the university. As with Tony Kim, the university said that Kim's detainment had nothing to do with his employment.

He was detained a couple weeks after his colleague and charged with "hostile acts," state media reported, but they did not say whether the two cases are related. It is also not known if he was convicted or sentenced.