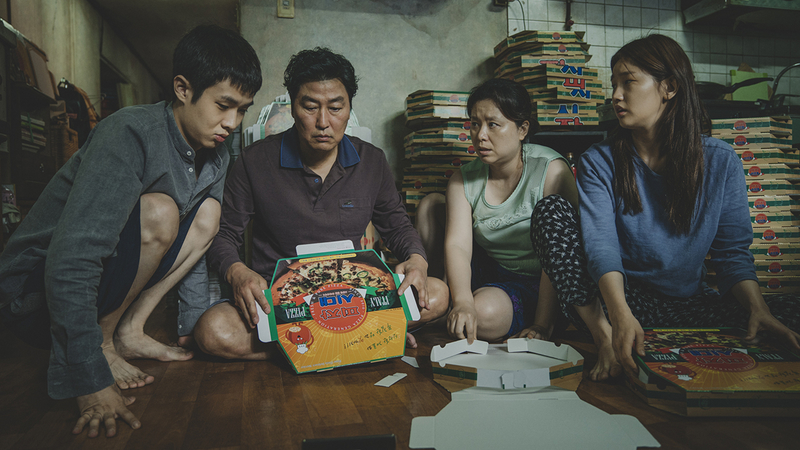 The dark comedy, centered around income equality's wild influence on two families, was the sixth film to be nominated for best international film (previously known as best foreign language film) and for best picture in the same year. It is also the best picture category's first Korean film.

"Writing a script is always such a lonely process. We never write to represent our countries. But this is very first Oscar to South Korea. Thank you," said director Bong Joon Ho upon accepting the best screenplay award.

It remains to be seen whether "Parasite" will beat out other best picture nominees, like World War I epic "1917" and Quentin Tarantino's industry-glamorizing "Once Upon a Time ... in Hollywood."

Although "1917" took home several prestigious awards this season, "Parasite" won best ensemble from the Screen Actors Guild, which was significant considering actors make up the largest percentage of the film academy.

"Although the title is 'Parasite,' I think the story is about coexistence and how we can all live together," said Song Kang Ho, one of the film's stars, through a translator at the Screen Actors Guild Awards.

The film, however, was not nominated in any of the Oscars' acting categories, despite the star power of actor Song Kang Ho, who plays the Kim family patriarch.

Bong, affectionately nicknamed Director Bong by his American audience, has worked in the industry for 20 years, previously recognized for post-apocalyptic film "Snowpiercer" and fantasy tale "Okja."

The 50-year-old filmmaker said he knows there will be pressure with what comes next. For now, he is just enjoying this most unusual experience.

"I saw Martin Scorsese three times across four days and then I would be eating and realize that Joaquin Phoenix is right behind me," said Joon-Ho. "So it's a very surreal experience."

Mickey Hyun, from the Korean Cultural Center of New York, says while it's a Korean film, the story is universal.

"Social conflict to inter-generational issues to capitalism, really, I think everyone can relate to that on some level," he said. "And it's really organically opened up so many waves of conversation."

Speaking at the New York Film Festival, Bong said the story about an impoverished family scheming its way into the employment of a rich family is resonating all over the world.

Film at Lincoln Center premiered the film at the New York Film Festival and then began showing it to the public in October, and it has been the most successful new release in the center's history.

"It is unusual these days for a non-English film to break through on this level," programming director Dennis Lim said.

Parasite is still selling out on weekends and is so popular that the director has held Q&As at Film at Lincoln Center every few weeks.