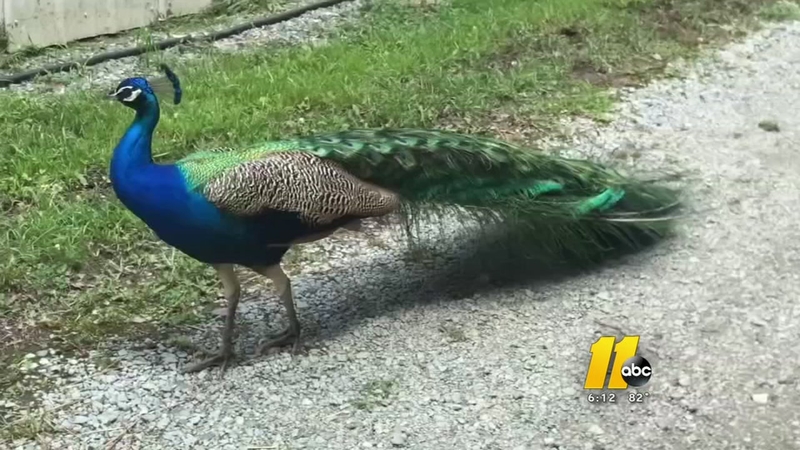 APEX, NC (WTVD) -- Several sightings of peacocks, many in unfamiliar places, have made the rounds in social media during the past month.

Now, Apex residents are scratching their heads after seeing a peacock roaming the streets.

The Apex peacock is seen wandering around yards and ruining landscapes.

The pheasant has been seen in several neighborhoods, snacking on some plants.

But locals are stumped on how to catch him.

One resident posted a picture of the peacock to Nextdoor saying, "If you haven't seen it, there is a peacock roaming the neighborhood and it eats landscaping plants. If you know someone who is missing or wants one, well I don't know where it is right now or how to catch it."

But it's not the first peacock to be seen in Wake County.

Peacock retrieved from Knightdale Target
The Target in Knightdale got an unexpected visitor Friday morning.

In fact, one was retrieved from the Target in Knightdale.

"In one year, I'd say 5-6 (instances) where we're really being asked to help. And to take them in," said Alex Daehnrich, the director of Blind Spot Animals Sanctuary in Rougemont.

The sanctuary recently took in the peacock from the Target in Knightdale and works with area shelters on such exotic animal cases.

Daehnrich explained peacocks often wander for a variety of reasons, including their territorial nature.

"A young male is growing up to the older one, they will be challenged and one is the loser and has to leave and is trying to find a new territory," Daehnrich noted.

Annually, many of these sightings take place in May and June, which is mating season for peacocks.

They typically like to be surrounded by their flock, leading many stragglers to wander to the sanctuary or other farms where peacocks already are.

Because of that, people have noticed them pop up in their yards. While understandably startling, the birds are not dangerous and likely will leave on their own.

"Peacocks are not just showing up and establishing territory and staying there. Very often what they do is wander through the farms and backyards and they are just coming through," said Daehnrich.

However, if they hang around for a couple of days or take shelter in a tree, call your local animal control.

Right now, the concerned Apex citizens just want to reunite the peacock there with its owner.

Buckwheat Farm, a farm near the area, said all of its peacocks are accounted for.