North Carolina is a 'purple' state. Here's why 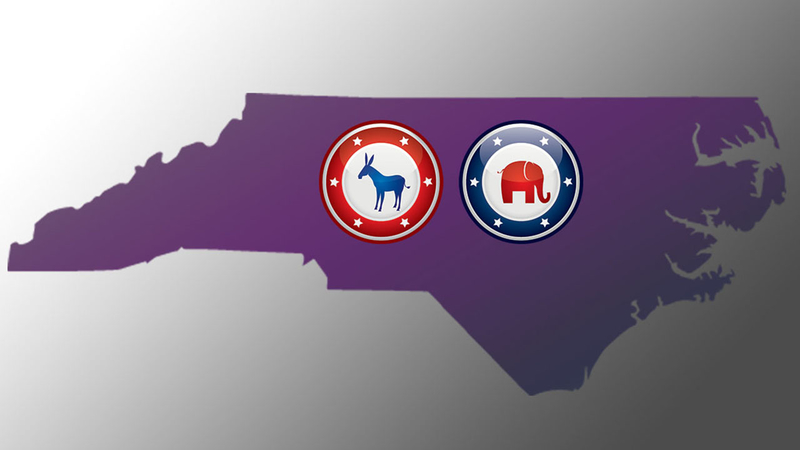 North Carolina is a 'purple' state. Here's why

Politically speaking, North Carolina may not be a red state or blue state, at all. It seems to be more of a purple state.

ABC11 asked some of the state's top political thinkers to explain why:

Jim Hunt. More than anyone else, the four-term Democratic governor was able to gauge North Carolina's willingness to accept or reject left-of-center policy prescriptions. While other states exited the Democrats' "Solid South" and became reliably red, the North Carolina of the 1970s through 1990s continued to support business-friendly Democrats for state elected positions even as they started voting more frequently for Republicans at the national level.

Republican ascendance at the state level is a recent phenomenon. Sure, the GOP holds the governor's mansion and the legislature, but those are recent developments. Democrats controlled the levers of government power through 2010 and 2012, and they still exercise influence through bureaucratic positions and high-power roles in the ranks of lobbyists, consultants, and the rest of the political class.

Demographic changes. One of the fastest-growing states in the nation has a lot of people relocating from other parts of the country. They're bringing their political positions with them, meaning that they're not as likely to identify with traditional N.C. Democratic or Republican stances on the issues. Plus younger voters will be skewing voting patterns in ways that reflect their differences from Baby Boomers and Generation X.

The rise of the unaffiliated. With more and more people deciding they don't want to be tied to either major political party, it's more difficult for either party to dominate elections. Most of the unaffiliated align ideologically with either Democrats or Republicans, but they do not provide those parties with reliable votes.

40% of the registered voters are Democrats; 31% are Republicans; 29% are Unaffiliated/Independents/Other. However, around 15% of the Democrats (primarily rural conservative Democrats) usually vote for Republicans while only a handful of Republicans tend to vote for Democrats.

Make those adjustments and by voting behavior (as opposed to party registration) NC's electorate votes like this:
Democratic Base Vote 35%
Republican Base Vote 35%
Independent/Swing Vote 30%

Obviously, a candidate has to win the Independent voters to be elected. However, and those voters have an Unfavorable view of both parties, are Unfavorable to both Hillary and Trump, and generally take a dim view of politicians.

That's why NC is a 'purple state.'

There are 2 key factors why North Carolina is a purple state:

1. The growing influence of the unaffiliated voter in North Carolina. Each presidential election since 2008 we have seen as much as a two percent growth in the performance of unaffiliated vote. In this year's election, we could see as much as 25% to 26% of the total votes cast coming from independent voters in the state. In 2006 and 2008 elections, these independent voters supported Democrat candidates at the federal and state; in 2010, 2012 and 2014 these independent voters have support Republican candidates for President, Senate, Governor and State Legislature.

2. The state's unprecedented growth in our metropolitan markets (Charlotte, Greensboro/Winston-Salem and Raleigh is fueling the rise of the unaffiliated voter as well. The people moving in the state have no allegiance to any party, they vote on issues and the candidates they prefer. In this year's general election, 40% to 45% of the voters casting ballots have lived 10 years or less in the state.

I think a couple of key points explain NC's purpleness: