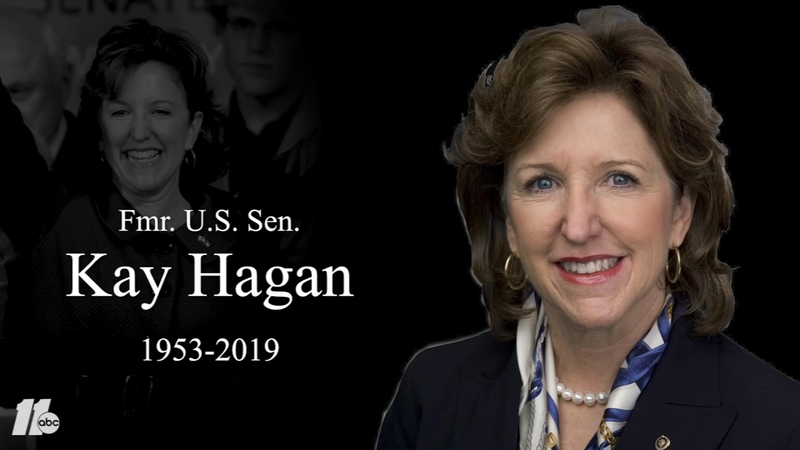 Former U.S. Sen. Kay Hagan, a North Carolina Democrat who served in Congress after beating Republican Sen. Elizabeth Dole in a high-profile 2008 race, has died at her home in Greensboro.

"We are heartbroken to share that Kay left us unexpectedly this morning," her family said in a statement. "Kay meant everything to us, and we were honored to share her with the people of North Carolina whom she cared for and fought for so passionately as an elected official. Most of all, we already miss her humor and spirit as the hub of our family, a role she loved more than anything. Nobody could light up a room and make people feel welcome like Kay," the family said. "We are deeply grateful for the support shared with our family as Kay worked to regain her strength these last few years after her illness, and we appreciate your continued prayers."

Hagan died of encephalitis, or brain inflammation, caused by Powassan virus, a rare virus spread from ticks to humans, said her former Senate spokeswoman, Sadie Weiner, who now works for Gov. Roy Cooper. Hagan contracted the illness in late 2016, and the subsequent brain inflammation made it difficult for her to speak and walk.

Hagan served just a single term after losing to Republican Thom Tillis in 2014.

"Susan and I are absolutely heartbroken by Senator Kay Hagan's sudden passing and we extend our condolences and prayers to her loving family and many friends," Tillis wrote Monday. "We join all North Carolinians in remembering her dedicated and distinguished record of public service to our state and nation."

Hagan suffered health challenges in recent years after suffering a tick bite. In 2017, she was hospitalized in Atlanta with brain inflammation caused by a virus spread by ticks from animals to humans.

She was rushed to a hospital in 2016 after falling ill and was later diagnosed with a type of encephalitis.

Cooper ordered all state flags to immediately fly at half-staff through sunset Tuesday to honor Hagan.

"Kristin and I are deeply saddened to learn of the passing of our dear friend Senator Kay Hagan," Cooper said. "I've known Kay since our days in the legislature together. Kay was a fierce advocate for North Carolina, and she represented our state with courage and grace her entire career. She made it a mission to inspire young people - especially young girls - to enter public service, and she served as a role model to so many. North Carolina is mourning one of our best today."

"Kay came to the Senate in 2009, after 10 distinguished years in the North Carolina Senate, and immediately went to work on economic recovery and ensuring the strength of our State's military installations," Price said in a statement. "We worked together on many issues, including a bipartisan bill to ensure that tuition assistance for service members did not fall victim to sequestration."

Hagan, a Shelby native, served in the North Carolina Senate from 1999 to 2009. She was also a lawyer and a banking executive who earned her undergraduate degree from Florida State University in 1975, then earned a law degree from Wake Forest University three years later.

For 10 years, Hagan worked for NationsBank, which was to become Bank of America, where she became a vice president in the estates and trust division. After being a stay-at-home mother, the niece of former Florida governor and U.S. Sen. Lawton Chiles launched her own political career and won a seat as a Democrat in the North Carolina state Senate in 1998.
.

Former President Barack Obama said, "Michelle and I join all those in North Carolina and across the country in mourning the loss of Senator Kay Hagan. She was, quite simply, a terrific public servant-eager to find common ground, willing to rise above the partisan fray, and always focused on making progress for the people she served. As President, I deeply appreciated her reasoned, pragmatic voice, whether we were working together to pass the Affordable Care Act, reform Wall Street, support working families, or just make Americans' lives a little better. Her record is one all public servants would do well to follow, and her perspective is one we'll sorely miss. Our deepest sympathies go out to Chip, her three children, and everyone whose lives she touched. We're all better off because of her."

Although she initially showed reluctance to lend her support, Hagan backed the Affordable Care Act pushed by Obama. She also worked to limit payday lending, continuing the work she began as a state senator.

"My heart goes out to Chip Hagan and the entire Hagan family in the passing of Kay," said U.S. Rep. Mark Walker, R-NC. "Sen. Hagan was dedicated to serving North Carolinians and especially to the men and women of the Armed Forces in America's most military-friendly state. Chip has exemplified the devotion, love and care that every husband should aspire to."

"Brooke and I are deeply saddened by the sudden and untimely loss of Kay Hagan," Burr said. "Kay dedicated much of her life to serving North Carolina, and she will be remembered for her tireless work on behalf of the home and the people she loved. In our time as Senate colleagues, we worked across the aisle together frequently on issues that we both knew would determine what type of country our children would inherit, from conservation to our common defense. She tackled everything she did with a passion and a sense of humor that will be missed. Our thoughts and prayers are with her family."

In a statement, the NCGOP said: "We are saddened to learn about the passing of former Senator Kay Hagan. Mrs. Hagan served her state admirably, advocating for its citizens in the state legislature and the United States Senate. She remains in our thoughts, and our sincerest condolences go out to her husband Chip and her family during this difficult time."

NC House Speaker Tim Moore said Hagan represented "the very best of North Carolina both as a committed public servant and an accomplished executive in the private sector."

"Her tragic death is a shock to the citizens she served faithfully in the General Assembly and the U.S. Congress," Moore said. "I join millions of her fellow North Carolinians remembering her immense contribution to our state and sending her family our deepest condolences during this tragic time."