Judge rules Confederate statue in Pittsboro can come down 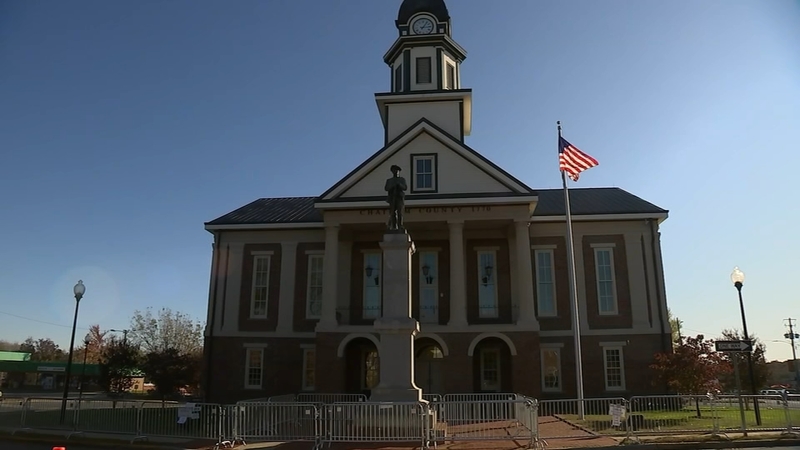 PITTSBORO, N.C. (WTVD) -- A Confederate statue in Pittsboro will be removed from the Old Chatham County Courthouse and historic museum grounds.

On Wednesday, a judge denied a request from the United Daughters of the Confederacy to keep the statue there.

The county gave the group until November 1 to remove the statue or it would take action. But last month, a judge blocked the county from removing the statue -- until Wednesday.

The UDC argued through its attorney in court that taking the statue down would cause irreparable harm.

But Judge Susan Bray said she felt the United Daughters of the Confederacy did not provide sufficient evidence to support why the statue should stay.

Now, after 112 years, the Confederate monument is in its final year at the site.

Attorneys for the United Daughters of the Confederacy said the monument has nothing to do with race and oppression.

UDC argued the county used taxpayer money to take care of the statue and because of that, it is considered a public monument, and is protected under state law.

The County argued the monument still belongs to UDC. County leaders also claimed it was not a gift to the county but to those Confederates who served. And that the $3,300 in taxpayer money used on the monument in 1988 was to keep it from falling down and hurting someone.

The United Daughters of the Confederacy (plaintiffs) said removing the #confederate statue would cause irreparable harm. The judge gave the County permission to remove it. County didn’t give me a timeframe on when that’ll happen or where it will go. pic.twitter.com/BruWC5daeF

"The monument at one time did reflect government speech that Chatham County wanted to convey, but times change and the Chatham County Board of Commissioners recognized that change," said Nick Ellis, attorney for Chatham County.

Judge Bray denied the motion for a preliminary injunction, which if granted, would have allowed the monument to stay up while the group sues the county. But after Wednesday's development, the county can remove the 27-foot-tall statue.

Supporters of the statue are disappointed.

"The most polite word I can use is bulls***," said one supporter, who did not want to be identified.

County leaders said the statue will be removed as soon as it receives written approval.

"The plan is to do it in an expedient way and in a way that is safe," said Karen Howard, Chatham County Commissioner.

The United Daughters of the Confederacy are suing the county for their attempt to take it down. The County has filed a motion to dismiss that lawsuit.