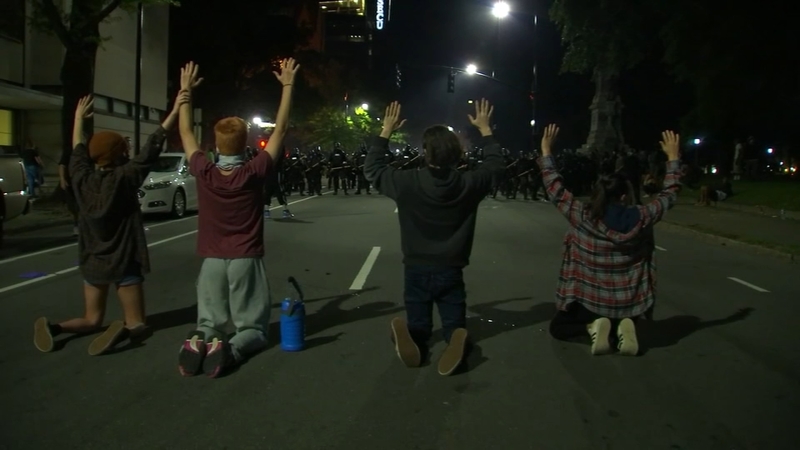 RALEIGH, N.C. (WTVD) -- There is a bill circulating that is getting a lot of attention at the General Assembly.

House Bill 805's -- also known as 'Preventing Riot and Civil Disorder Act' -- proposed goal is to "prevent rioting and civil disorder." It was introduced on Tuesday and it's moving rapidly through legislature.


Speaker Tim Moore said he spoke with law enforcement and they wanted to stiffen penalties for those engaged or inciting a riot.

According to @NCHouseSpeaker it's like HB805 will pass the house next week and go to the senate next month to be talked about.
This is the "Preventing Riot and Civil Disorder Act" #abc11 #ncpol pic.twitter.com/QjXoImTWa4

Activists are slamming the bill because they say it would cut down on a person's right to demonstrate.

"The lives and rights of humans are what's at stake," said Jazmyne Childs, policy and program coordinator at Advance Carolina. "No amount of property equals a human life."

The ACLU of North Carolina said riot laws in the state are vague so this is potentially targeting more people with more jail time.

"If somebody is at a protest, it becomes what a law enforcement officer and prosecutor defines as a riot and that person can get charged with a Class F felony," said Daniel Bowes of the ACLU.

Speaker Moore said the goal is not to punish peaceful protestors, especially, after what he saw at the Capitol in January and in downtown Raleigh last summer, he felt something needed to be done.

"The problem is when it turns to violence and that's what we need to deal with," Moore said. "Only folks that should be dissuaded from coming out are those who want to commit violence and I do want them to feel dissuaded."