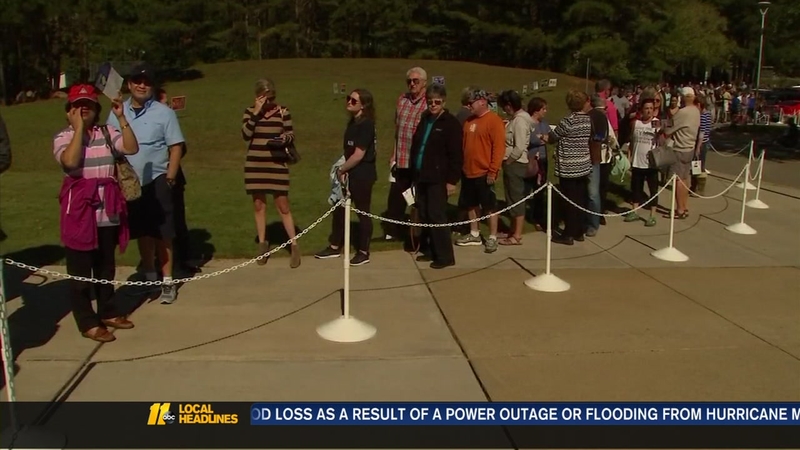 RALEIGH (WTVD) -- This year's contentious presidential election has people eager to have their say, if the long lines for early voting are any indication.

Early voting got underway in North Carolina on last week and people lined up early to cast their ballots in Raleigh and Durham.

However, early voting is up 2-3 percent compared to 2012. The increase in traffic can also be attributed to the elimination of straight-party voting. Wake County Board of Elections director Gary Sims says 2016 voters are at the voting booth an average of 8 minutes. Sims says in 2012, that number was 3 minutes shorter.

"I thought about turning around, but I've heard it's been long every day," said early voter Kyle Wall.

Wall's projected wait at the Lake Lynn Community Center was just over an hour.

Folks saying it's about a 75-90 minute wait to early vote at Lake Lynn Community Center in Raleigh. #NCVotesEarly #ABC11 pic.twitter.com/9Y7EfFByQs

"I would say this is the reason to come out," Wall said. "The fact that this many people are waiting mean it's significant and significant enough to do my civic duty."

Some voters told ABC11 they waited as long as 90 minutes to cast their vote at Lake Lynn Community Center in North Raleigh.

The Herbert C. Young Community Center in Cary has also reported long wait times. As of the close of business on Oct. 25, the Cary location has unofficially processed 10,248 ballots - the most at any of Wake County's early voting sites.

The site supervisor says Cary's operation is efficient and they go through 200 voters an hour. Preethi Sriran stopped by the community center on her lunch break to cast her vote.

Ram Yallapragada also voted in Cary and feels voters in the United States have it better compared to other parts of the world.

"Haven't you seen it in other countries? It will be miles and miles long," Yallapragada said. "You have to do this! This is your job to do this. It's your duty!"

Wake County Board of Elections also offers "curbside voting" for the elderly and people with physical disabilities. Voters will be allowed to remain in their vehicles and must sign an affidavit stating why they are unable to stand in line. A poll worker will collect the completed ballot and place it in a privacy sleeve where it will then be tabulated along with the other ballots.

Early voting ends at 1:00 p.m. on Saturday, November 5, at all locations. Voter wait times are generally the longest on the last days of early voting.

For more information on early voting in Wake County, you can visit WakeGov.com/elections