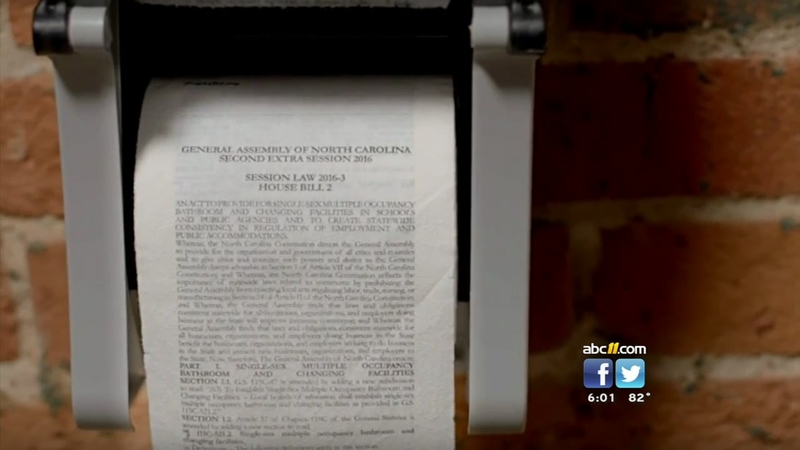 An ad that reads "Y'all Means All" is displayed in the window of Raw Raleigh.

"We've had some people take photos with the sign and with us, and they're just expressing gratitude that we're open to the community," said owner Leslie Woods.

Inside the juice bar and cafe, a unisex sign hangs between bathrooms.

"We do not have a preference on which restroom you use. They're the same set up," said Woods.

Downtown businesses are banding together against the new law.

The latest report from the Greater Raleigh Convention and Visitors Bureau estimates $3.2 million in lost business with another $34 million at risk.

Downtown leaders fear the economic backlash could slow momentum at a time when growth in the city is on the rise.

"Downtown represents 30 percent of all the tourism that comes to all of Wake County, so that's a concern. We're also hearing from companies that are talking to our recruiters that are reconsidering locating in downtown," said David Diaz with Downtown Raleigh Alliance.

The Raleigh Convention Center is among the hardest hit venues.

The city recently posted new signage on four family restrooms inside the building, designating them as gender neutral.

New signs were also posted outside family restrooms at Red Hat Amphitheater and the Duke Energy Center for the Performing Arts.

Acts of defiance are also popping up on social media.

She told ABC11 she won't stop using the restroom with which she identifies.

"Either arrest me for violating this law or admit that it's nothing more than encoding hatred in the law," said White.

Lawmakers have yet to say how they plan to enforce HB2 or whether anyone has been cited for breaking the law.

A bill filed by Democrats Monday to repeal it has been sent to a judiciary committee.