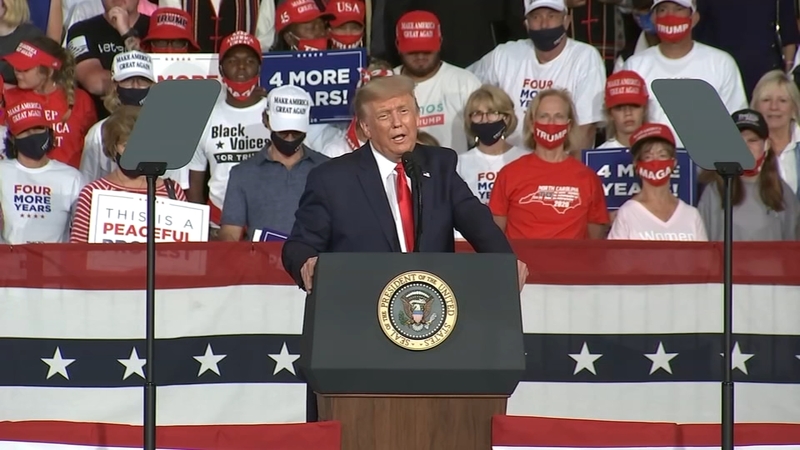 WINSTON-SALEM, N.C. (WTVD) -- President Donald Trump made his second September appearance in North Carolina on Tuesday, 56 days before the election.

President Trump arrived in Winston-Salem around 7 p.m. at the Smith-Reynolds Regional Airport.

Trump's rally came with thousands of supporters in attendance on the tarmac.

The president told supporters staffers gave him a crowd estimate of 15,000 in attendance. However, the crowd was much smaller than the estimate given. Prior to the rally, event staff handed out masks to attendees and encouraged their use. Upon entry into the seating area, many were seen not socially distant or wearing masks.

"Your state should be open," Trump said. "It's a shame what's going on, and I'll tell you what, on Nov. 4, every one of those states will be open. They're doing it for political reasons."

Trump also went the offensive to say if Democratic vice presidential nominee Senator Kamala Harris ever became president, it would be an "insult."

It's clear why both China and the flag-burning rioters want Biden to win," Trump said. "They know his policies will be the downfall of America and they know my policies will lift America to new heights."

In Winston-Salem, President Trump fires back against anonymous allegations that he disparaged fallen military members.

The president touted his economic record and soaring prosperity, which included record-low unemployment for Black Americans before the COVID-19 pandemic and subsequent shutdowns.

"And never forget, they're coming after me because I'm fighting for you," Trump said to the enthusiastic crowd.


Building on his image as the only candidate who sides with law and order, Trump attacked Biden's delayed condemnation of a summer of violence and rioting in Democrat-run cities.

"Joe Biden and his party spent the entire summer cheering on the rioters rampaging through Democrat-run cities falsely labeling them as peaceful protesters ... you can't go to church anymore, you can't go to church, you have to stay in your house, but if you're willing to riot, running down Main Street, you're allowed to do that because you're considered a peaceful protester," Trump said.

In reference to insults, Trump denied he said anything negative about the military, as was reported in an article in The Atlantic that he referred to American service members killed in war as "losers" and "suckers."

Additionally, Chief of Staff Mark Meadows met with reporters Tuesday morning to address Trump's alleged comments about "endless wars" and told Pentagon officials the president was not referring to them.

"I just think that he told us all the things he has done. More than he actually said in 2016. And just being here in this crowd, which was great," said Linda Hemric of Greensboro after attending her first Trump rally tonight.

Moments ago, @LtGovDanForest addressed the crowd here in Winston-Salem in his bid to be North Carolina’s next governor. #ABC11 pic.twitter.com/ADAmgPCLxL

Also spotted - and has been wearing mask throughout - @SenThomTillis, who’s in a tight race for re-election versus @CalforNC. Just as in #RNC2020, Tillis not appearing on stage to warm up crowd/viewers before @POTUS @realDonaldTrump takes the mic. @ABC11_WTVD @ABC #ncpol pic.twitter.com/9i68FrX7UK

In a Monday news conference, Trump was highly critical of Democratic challenger Biden, calling him "stupid" and that he and Democratic vice presidential candidate Sen. Kamala Harris would "destroy this country and would destroy this economy" if they won the election.

As thunder was heard in the background the president said, "God is saluting you" and that the battleship shows "we don't tear down the past."

Biden said Trump "lives by a code of lies, greed and selfishness" as he met with labor leaders in Harrisburg, Pennsylvania on Monday.

While Biden is maintaining his lead in many polls, the race remains competitive in the states that matter most this fall. Biden's allies in places like the Minneapolis suburbs and western Pennsylvania are calling on him to ramp up his on-the-ground presence. Biden's team released a statement on Trump's visit.

"President Trump's mismanagement has cost too many North Carolinians their lives and livelihoods, with communities of color bearing the brunt of the devastation. He has looked away from North Carolinians in need of a lifeline, even as his wealthy corporate donors get ahead."

This marks the president's 13th visit to North Carolina, which began sending out absentee ballots last Friday. A handful of other battleground states - including Pennsylvania, Michigan and Virginia - are days away from offering early voting.