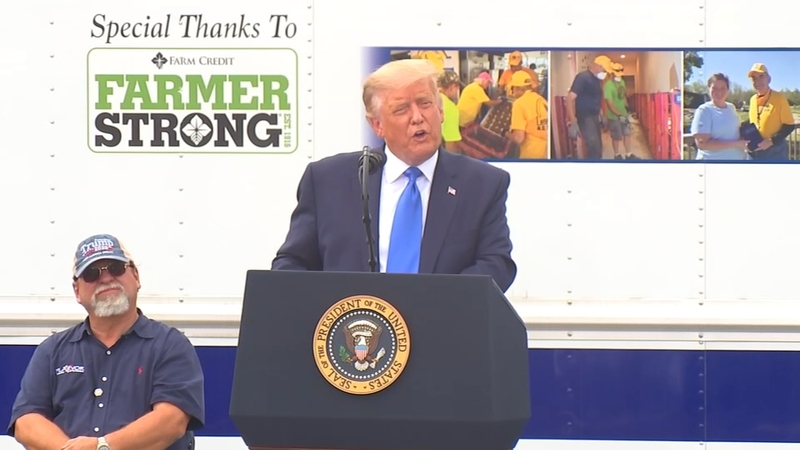 MILLS RIVER, N.C. (WTVD) -- President Donald Trump traveled to North Carolina on Monday, making a surprise appearance at the Republican National Convention before heading to tour a Farmers to Families Food Box site and voice support to the state's farmers.

Trump and his daughter Ivanka Trump visited a Farmers to Families Food Box program site in Mills River, speaking to a packed crowd.

During the event, Trump took some jabs at Governor Roy Cooper for not reopening the state quickly enough.

He also spoke about the recovery of the economy and his optimism on the country overcoming COVID-19.

The main focus, though, was Flavor 1st Growers and Packers -- an organization that partners with Baptists on Mission to build the Farmers to Families Food Boxes.

The White House reports that the program has distributed nearly 70 million family-sized boxes to those in need during the pandemic.

The president announced on Monday that another billion dollars will be poured into the program.

"Each time you deliver a food box to a family, you show them that, in this country, no one is forgotten," he said at the event.

The event was met with sharp criticism from the North Carolina Democratic Party chair who called the stop "desperate."

Mills River is a town in Henderson County with an estimated population of about 7,000. Monday marked President Trump's 11th visit to North Carolina.

The last time Trump was in North Carolina he visited FUJIFILM in Morrisville, where a COVID-19 vaccine is being manufactured.
EMBED More News Videos