WTVD
By Joel Brown
CHAPEL HILL, North Carolina (WTVD) -- Before this latest round of protest marches, all-night vigils and new calls to take the "Silent Sam" statue off its perch at UNC Chapel Hill, there was June 2, 1913.

It was Commencement Day at UNC and the day the United Daughters of the Confederacy dedicated what was then, not called Silent Sam at all; most people just called it the Confederate Memorial.

Amidst the pictures and old quotes in the archives of UNC Libraries there is the speech Bettie Jackson, a members of UDC, delivered at the monument's dedication. Jackson told the crowd, "This monument is erected in memory of those students of this university who served in the armies of the Confederate States of America."

As UNC students continue a protest vigil at Silent Sam, we look at the long, controversial history of the Confederate monument. At 11. pic.twitter.com/XYLk3cN1QG

Now, 104 years later, the protesters on Franklin Street and the ones holding vigil at the statue's pedestal argue that the Confederacy symbolizes slavery and the Old South's battle to defend it.

The university's archives also include the racially-charged remarks given by Julian Carr at the statue's dedication.

Carr, an industrialist, was prominently involved in the Methodist Church, the Democratic Party, and several Confederate veterans' organizations. Carr, himself a Confederate war veteran, told the crowd, Confederate soldiers' "courage and steadfastness saved the very life of the Anglo-Saxon race in the South."

Carr went on to share a recent story of "horse-whipping a negro wench until her skirts hung in shreds," because she insulted a white woman on Franklin Street.

It wasn't until the 1960s, however, that opinions got louder that Silent Sam was a racist symbol that should be removed.

Sam was covered in paint following Martin Luther King's assassination. A KKK robe was tied around its neck in 1970. A UNC housekeeper protested "institutional racism" at the statue's base in 1997. And most recently, there was a furor over Sam during the height of the Black Lives Matter movement.

It's Silent Sam's long and complicated history that brings us back to present day where a student-led vigil is into its second full day. Students are pledging not to leave until Sam is taken down, though they are protesting in shifts. 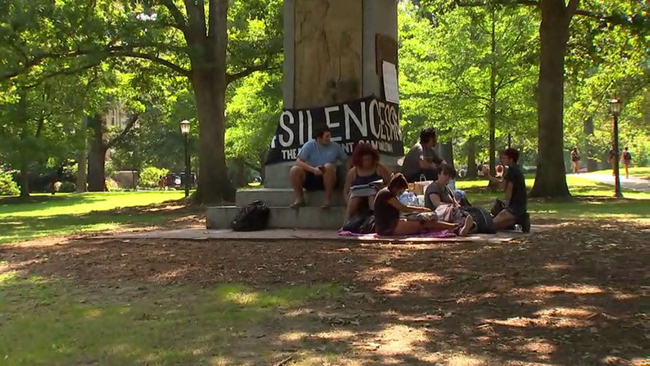 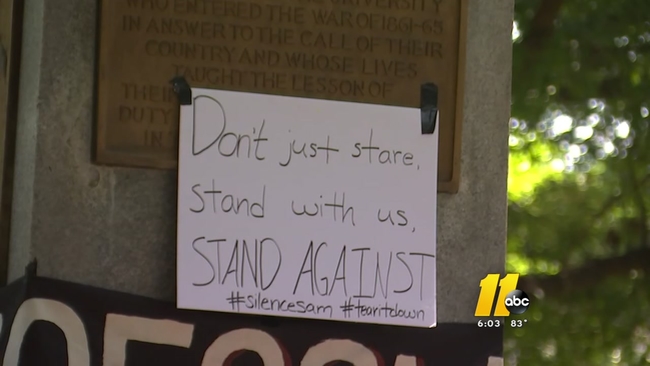