President Donald Trump to return to North Carolina, rally in Fayetteville on Thursday 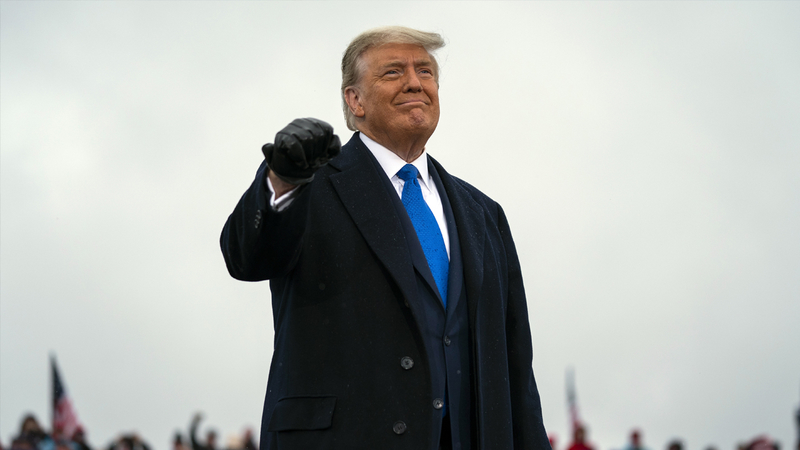 Trump to return to North Carolina, rally in Fayetteville on Thursday

The president will be at the Fayetteville Regional Airport around 6:30 p.m.

That visit will mark President Trump's ninth visit to North Carolina since the beginning of September and, in total, his 17th appearance in the Tar Heel State.

Most recently, Trump delivered remarks at the Robeson County Fairgrounds on Saturday.

There, he declared his support for a bill that would federally recognize the Lumbee Tribe of North Carolina.

When will we know the winner of the 2020 presidential election? These are the 3 likely scenarios

"This is a group that's been forgotten. We will ensure the forgotten men and women of our country are never forgotten again. I said it four years ago," he said.

Trump and Joe Biden are both after North Carolina's 15 electoral votes.
"North Carolina is an absolute must win state for Donald Trump because already the map works against him," said ABC News chief Washington correspondent Jonathan Karl. "He won last time because he won these surprise victories in Wisconsin, Michigan and Pennsylvania."

The Biden campaign has long targeted the president when it comes to COVID-19, which has spread to more than 250,000 North Carolinians and killed more than 4,000.

"As COVID recovery becomes the conversation in 2021, we must have a voice for the south and North Carolina is going to be an essential part in getting that done," Stacey Abrams, the rising Democratic star from Georgia and campaign spokeswoman, said in an interview. "Donald Trump has shown himself incapable of leadership, incapable of thinking about the needs, incapable of empathy."

Abrams, moreover, thinks the gameplan for Biden must be to reach out to a different kind of undecided voter - the people who aren't sure if it's worth going to the polls.

"My belief is when you know you have a leader who will work for you, then you will vote because your voice matters and your vote matters."

The North Carolina Democratic Party released the following statement about Trump's Thursday rally:
"Ahead of his 9th visit to North Carolina since the Republican National Convention, Donald Trump still has no health care plan, no plan to rebuild our economy, and no plan to get the coronavirus under control. North Carolinians are living through the consequences of Trump's failures every day, and that's exactly why they're voting in droves. Nothing he says in Fayetteville on Thursday will change the facts on the ground: more than 4,100 North Carolinians have died due to this pandemic, over a quarter million have been infected, our unemployment rate is on the rise, and we're no closer to containing this virus than we were six months ago. That's why in seven days, our state is going to play the key role in electing Joe Biden and Kamala Harris -- leaders who are committed to building back better and making the critical investments we need to thrive from day one."
Report a correction or typo
Related topics:
politicsfayettevilledonald trumpvote 2020nc2020joe biden2020 presidential electionpresident donald trump
Copyright © 2021 WTVD-TV. All Rights Reserved.
TOP STORIES
WEATHER: Hot, humid day on tap with feels-like temps up to 103
Surviving combat to die at home: Soldier picking out his coffin at 35
Teen girl attacked by bear while sleeping in hammock
Waitress attacked after confronting group who didn't pay $70 bill: Police
Tornado touches down in Chicago suburb, destroying homes, trees
Claudette pulls away from North Carolina coast
High court sides with former athletes in dispute with NCAA
Show More
3 firefighters hurt while battling Chatham County fire
Amazon Prime Day sees Walmart, Target offering their own deals
LATEST: 52% of NC adults fully vaccinated before Biden visits NC
Wakefield HS grad wins $1.6M in Big Rock fishing tournament
3 injured in hot air balloon crash near Denver: Authorities
More TOP STORIES News