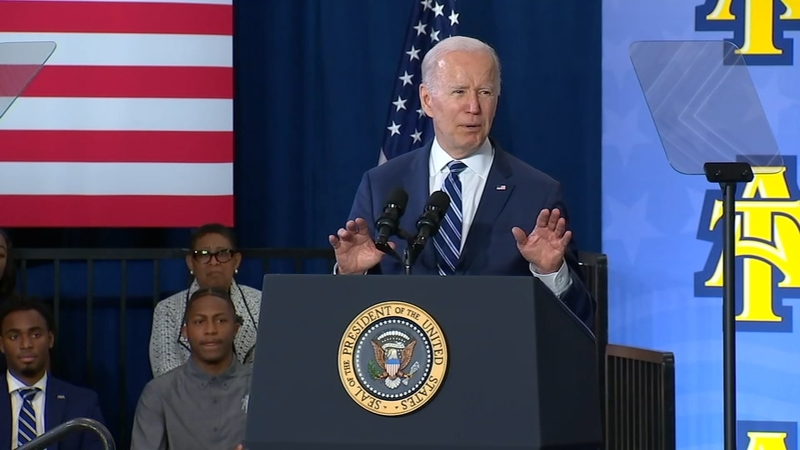 Upon arriving on campus, Biden, whose approval rating is at an all-time low, met with faculty and students studying robotics and engineering at the Martin Engineering Research and Innovation Complex.

"There's always a need for problem-solvers who can tackle the most difficult issues, including those involving the economy. And HBCUs prepare students for the challenge," said Malcolm Hawkins, an NC A&T student who introduced Biden at the Alumni-Foundation Event Center.

"I signed an executive order to advance HBCU excellence across the entire administration - everything from policies to funding. And speaking of funding, we were able to deliver a little more than $5 billion to HBCUs last year. $5 billion. And more to come," said Biden.

The president's remarks came just two days after a new Consumer Price Index report showed inflation had increased to 8.5% during the past 12 months.

"Seventy percent of the increase in inflation is a consequence of (Russian President Vladimir) Putin's price hike because of the impact on oil prices. Seventy percent," Biden claimed. "We need to address these high prices and urgently for working folks out there. That's part of why I'm talking about it's so important. When we build more in America, we increase economic capacity, and help lower everyday prices for families."

Inflation is at a 40-year high under Biden and political opponents aren't buying the Putin angle.

"Hardworking North Carolinians are sick of inflation and tired of President Biden's excuses," Sen. Thom Tillis, R-NC, said. "They see the consequences of his failed economic agenda every time they go to the grocery store and fill up their gas tank. The worst inflation in more than 40 years has been fueled by Congressional Democrats and the Biden-Harris administration recklessly spending and wasting trillions over the last 15 months. President Biden's only answer to date is blaming everyone else for his decisions and pushing a multi-trillion dollar tax and spending spree that would make inflation even worse. Our country is in desperate need of a new direction to get our economy back on track."

Gas prices increased by more than 18% from February to March, and are up 48% on the year. To try and combat this, the US has tapped into petroleum reserves, and the president visited Iowa on Tuesday to discuss making gasoline that's 15% ethanol to try to lower costs.

The Republican National Committee said Biden's policies have led to particular pain for the Tar Heel State. The RNC noted that last month, the average gas price in North Carolina hit a record high of $4.19 a gallon, though prices have decreased slightly since. The state has seen costs rise faster than the national average, with consumer prices in the South rising by 9.1 percent since last year, and the unemployment rate in North Carolina is tied for 23rd in the country, trailing 19 Republican-led states.

"The only thing less popular in North Carolina than Joe Biden are people who use "barbecue" as a verb," said RNC Spokeswoman Savannah Viar.

Though the White House has pointed to the ongoing conflict in Ukraine as being responsible for driving up gas, crude oil prices had been steadily increasing prior to Russia's invasion of Ukraine.

The price per barrel was as low as $66 in early December and sat at $107 on Thursday. However, crude prices spiked to $119 in early March, and are down about 7% since then. Increases in pricing are also driven by supply and demand, with more Americans traveling and returning to the office as COVID-19 metrics have improved.

As for ongoing supply chain challenges, the President emphasized the importance of enhancing manufacturing in the country.

Manufacturing activity has been strong since the beginning of the pandemic, prior to Biden taking office, though it has continued under his administration.

"After a long, tough stretch Americans are back to work. Our economy has gone from being on the mend to being on the move. I know we're still facing challenges of high prices (and) inflation," said Biden.

Republicans have consistently highlighted rising inflation, a point of focus during former president Donald Trump's visit to Selma Saturday night, where he appeared alongside a number of election officials. During his hourlong address, Trump emphasized a number of endorsements ahead of next month's primaries.

"Although I am glad President Biden is visiting North Carolina today, what he is here to sell North Carolinians is nothing more than snake oil," North Carolina House Speaker Tim Moore, R-Cleveland, said. "While he continues to overspend, inflation continues to skyrocket with no end in sight. Gas prices are soaring. The strain on taxpayers and businesses is greater than ever, and each of us feel the impact of bad Biden policies on our daily lives.

"In North Carolina, we have taken a different approach, and it's working," Moore continued. "We cannot spend our way to prosperity. Instead of rising debt, our state has a surplus thanks to responsible spending. Because of this, and despite the hardships caused by bad Biden policies, businesses are flocking to our state, and taxpayers have more money in their pockets. Maybe the president can take a few pointers from North Carolina."

While discussing large-scale projects, Biden singled out Toyota's announcement last year to invest $1.3 billion and build a new lithium battery plant in Greensboro, which is expected to create 1,700 jobs.

"We are laser-focused on strengthening our economy, moving quickly toward a clean-energy future, and recruiting even more great jobs," said Cooper, who spoke briefly prior to Biden's address.

In one light-hearted moment, Cooper loudly exclaimed "Aggie Pride," NC A&T's slogan, in which he received an enthusiastic reply from the crowd. Regan and Manning also spoke to the audience prior to the president's speech.

Biden praised NCA&T for its success in training the area's workforce. The nation's largest HBCU enrolls more than 13,000 students and plays a huge role in pushing Greensboro forward. The school also annually graduates the most Black engineers of any university in the country.

There were approximately 250-300 students, faculty, local elected officials, and business and community leaders in attendance.

Thursday marked Biden's first visit to North Carolina since November when he met with troops at Fort Bragg prior to Thanksgiving. North Carolina, which has emerged as one of the most competitive states in the country, will likely draw increased national attention as midterms near.