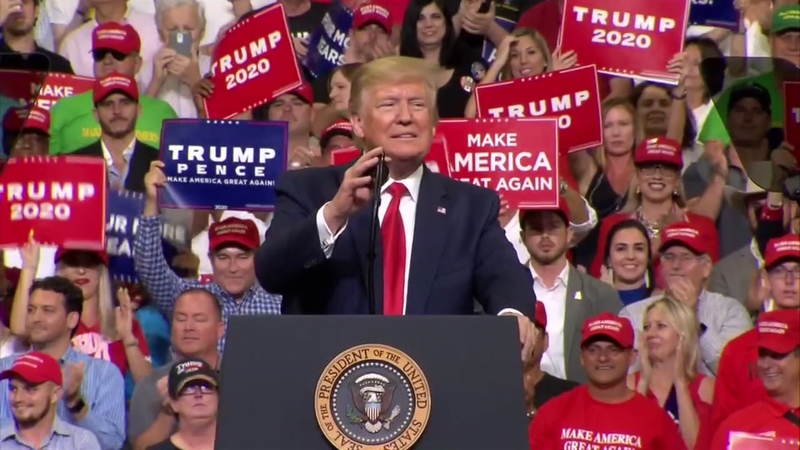 Call it a tale of two cities Tuesday night In Orlando -- President Donald Trump officially kicked off his re-election campaign with promises of a new crackdown on undocumented immigrants.

And, back in west Raleigh, Hispanic and Latin Americans flocked to PNC Arena to see Mexican singing icon Luis Miguel in concert -- with plenty to say about the president's get-tough immigration tweets.

Next week ICE will begin the process of removing the millions of illegal aliens who have illicitly found their way into the United States. They will be removed as fast as they come in. Mexico, using their strong immigration laws, is doing a very good job of stopping people.......

Roxanne Caraballo works as a migrant advocate and recruiter in Brunswick County.

"I think that if (President Trump) wants to continue to eat, I think he's gonna have a hard time," Caraballo said referring to the countless numbers of undocumented immigrants currently working in American agriculture. "Because who's gonna work our fields? Who's gonna provide?"

Caraballo says the migrants she works with every day are now living in fear.

Reyes agreed. The fear of sudden deportation is palpable.

"Their kids have to stay here in America, the parents have to go out of the country. And it just, for the kids, they don't know what to do," Reyes described.

Hours earlier the Trump Administration spelled out the new immigration enforcement effort that it's calling the Criminal Alien Program.

It details an ICE-wide directive targeting undocumented immigrants with criminal records who pose a threat to public safety.

A public safety threat does not describe Vicente Cabrera, who came here at age 14 from Mexico, with a mother seeking a better life. He now owns his own painting and drywall company in Raleigh.

"I would not have the life I have now if I still lived in Mexico," Cabrera said. "America is more opportunity for everybody."

U.S. officials with knowledge of the Trump Administration plans say the operation is not imminent but will begin in the coming weeks and be nationwide.