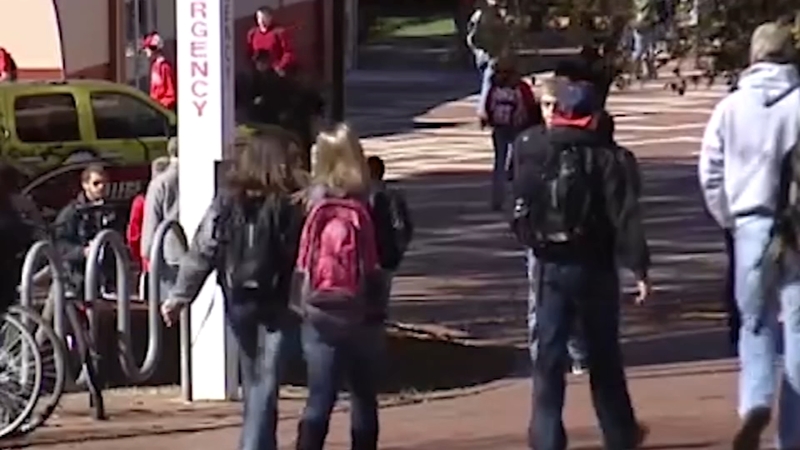 International students will be forced to leave the U.S. or transfer to another college if their schools offer classes entirely online this fall, under new guidelines issued Monday by federal immigration authorities.

RELATED: ICE announces students on visas must leave US or transfer to another college if their schools go online-only

"If in the middle of the semester, all international students are back on campus and settled, (and the) university goes fully online - we're all going to be kicked out (of the country). And we're all going to have to go back to our original country. That's what I mean by lack of security," said Rafael Albuquerque, an NC State student attending school on an F-1 visa.

Albuquerque is from Brazil, which is currently facing a travel ban to the U.S.

He is still deciding on whether he will attempt to return to the US next semester, or remain in Brazil and stay online.

Albuquerque said he would opt to remain with NC State online rather than try to find a different university in the US to attend in-person.

NC State's website notes they have students from 117 different countries, touting "the most diverse student body in North Carolina."

Francesca Del Posso, a fellow Brazlian on an F-1 visa who attends UNC, shared her reaction to ICE's guidelines.

"Unappreciated or like blindsided by all of it. Because the communication system that was set up between the university and international students honestly lacked a lot of clarity," said Del Posso, who is part of the university's Brazilian Student Association.

On Tuesday, Del Posso bought a plane ticket to Mexico where she plans to quarantine for two weeks prior to returning to the US.

"My priority right now is not losing my visa because my worst fear is losing my visa and then in our post-pandemic world, the Consulates being closed and things not working as fast as they should, and me not being able to get my visa back," Del Posso shared.

Del Posso explained some of the additional costs she's had to incur just to return.

"It's a hassle and a burden that shouldn't be put on international students. I realize my privilege of being able to do this, because it's so expensive and the flights are practically all full. And (it's for) us having to go through all these extra steps that are expensive and time-consuming just to be able to get into a country that we already have visas for," said Del Posso.

Her friend, Caroline Coelho, the president of the university's Brazilian Student Association, is planning on potentially opting forward differently.

"For me, my option is to stay in Brazil, because I don't want to go back to the US and risk not getting in and having to come back. I have my family here," said Coelho, a rising junior.

The Brazilian Student Association teamed up with other international student groups to send a letter two weeks ago to university officials about changes they'd like to see on-campus.

"I would move on with online classes or taking a gap semester. But either way, I would be paying for a full-tuition without being able to enjoy every single resource at UNC has to offer at UNC. And if I take a gap semester, my whole graduation would be messed up," said Coelho, who acknowledged potentially having to reapply for a visa and paying extra fees should she choose not to return.

Hana Khan, a fellow UNC student, is from the UK, which like Brazil is on a travel ban to the US. Although she is on a J-1 visa, which ICE officials did not allude to in their recently released guidelines, she is sympathetic to her fellow international students, and concerned about what the announcement could potentially mean in the future to students like her.

"The potential of being deported for choosing to take online classes and being forced to travel during a pandemic is just - being asked to do that is very unreasonable," said Khan.

"Just pointing to the situation as overall inhumane and the fact that students' lives are being treated like pawns in an effort to try and keep the school open, you're putting kids in danger who've come here and hustled and sacrificed everything," said Ruth Samuel, a UNC rising senior.

Samuel, who was born in London and is a naturalized US citizen, cited her parent's experience as immigrants in explaining in part why it was important she contribute to the spreadsheet.

"Just thinking about my parents' and my connection to immigration and migration. It's just unjust," said Samuel, whose parents are from Nigeria.

According to the Institute of International Education (IIE), there were nearly 1.1 million international students in the United States during the 2018-2019 academic year, an all-time high. Citing statistics from the U.S. Chamber of Commerce, international students contributed $44.7 billion to the US economy. As universities face tightening budgets and decreased donations stemming from the COVID-19 pandemic, further losses would only increase the significant financial strain.

"Not only do they provide an economic benefit to the US, but they are ingrained in US university culture. By deporting them, it's posing a threat to their studies because they can be sent to a country where the time zone conflicts with them attending class, so they won't be able to tune in. Or they'll be sent home to unstable connection, or there's restrictions on Zoom, so it does really put not only their safety (at risk), but their education as well," said Khan.

"Coming to UNC was great because they really touted this idea of diversity," added Marcella Pansini, who also worked on the spreadsheet.

Their friend Ankush Vij, a rising senior at UNC, also helped with the spreadsheet. Vij was born in the US before moving to India. He returned when he was in the eighth grade, and called on university officials to offer more clarity about their plans for the upcoming semester.

"I think UNC should probably take charge in being transparent with us in the sense that a lot of professors cannot be clear with us on whether or not their class will be online unless we specifically communicate with them via e-mail. And I think that's not fair," said Vij.

"We are deeply concerned about the Administration's new immigration directive that will limit the ability of qualified students and scholars to begin or continue their studies in the United States. This is a misguided effort that will only harm talented young people and the colleges and universities that are vital to our society.

Every year, thousands of students come to Duke from around the world to learn, conduct research, and take part in campus life. In this uncertain moment, we are committed to providing our international students the opportunity to begin and complete their education at Duke -- because we believe that it aligns with our mission to train leaders for the global community, because we recognize the vitality that a diversity of perspectives and backgrounds brings to our campus, and because we seek to foster a welcoming community of learners that reflects the shared challenges and aspirations our increasingly connected world.