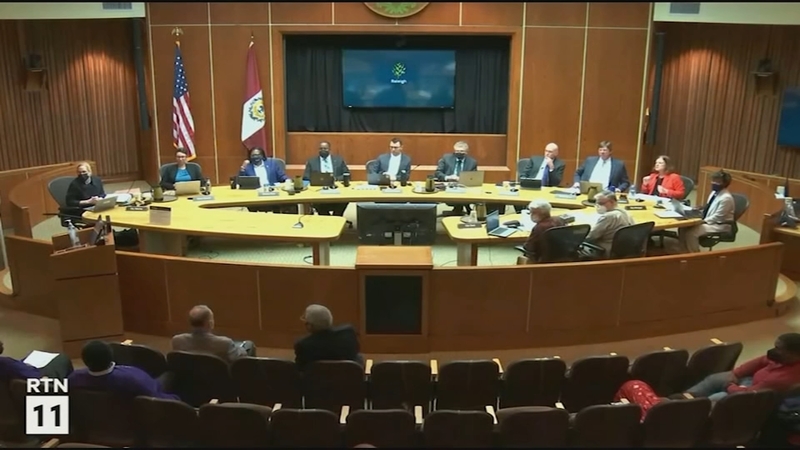 David Cox, who represents District B in northeast Raleigh voted against the measure passed by Mayor Mary-Ann Baldwin and his six other council members, claiming the result of moving many constituents out of District B into District A diluted the minority population of his district from 62% to 54%.

"Whether it was intentional or accidental, we have a redistricting plan that really disadvantages minority voters in the city of Raleigh," Cox told ABC11.

The council must redraw the lines of its five voting districts every 10 years following the U.S. Census to keep them nearly equal in population.

After months of gathering public input and feedback from organizations with expertise in redistricting, the council decided on the second of the three maps to move forward for Tuesday's public hearing, later voting 7-1 to adopt the map.

In a Facebook post to the Brentwood neighborhood Facebook page, which is largely affected by the redrawn map, Cox told his constituents the new map is, "blatantly racially discriminatory" and that's why he voted against it, adding that 55% of the roughly 55,000 people who were redistricted are racial minorities.

"I had concerns about that because according to the 1965 Voting Rights Act, the Voting Rights Act says we should not dilute the minority population for redistricting," said Cox, who has not yet stated whether he will run for re-election in the fall.

"These proposed districts were drawn by non-partisan professional staff and won the initial support of seven out of eight city council members who felt that this map best met all of the criteria including contiguity, compactness, preserving communities of interest, and taking into consideration future growth in the city. The proposed districts do not dilute the voting strength of any group and will serve our community well going into the future."

The new map is being delivered to the Wake County Board of Elections for use in the November 2022 election.

Patrick Buffkin, council member currently representing District A and who is running for U.S. Senate sent the following statement to ABC11:

"The process that produced these maps featured an unprecedented level of transparency and public input, including review and comments by civil rights organizations. One district should not be viewed in isolation, and politicians shouldn't be drawing their own districts. The map that council adopted protects minority voters by ensuring that minority voters are neither unlawfully packed nor diluted in majority-white districts. District B remains a minority-majority district while the diversity of district A is increased to ensure that minority voters have a voice across the city."
Report a correction or typo
Related topics:
politicsraleighgerrymanderingdiscriminationredistrictingafrican americanselectionraleigh news
Copyright © 2022 WTVD-TV. All Rights Reserved.
TOP STORIES
Strong storms push into central NC bringing heavy rain, flooding
Homeless veterans get an assist from Durham's Rotary Club
Truck slams into NC woman's new home
SCOTUS makes it tougher for prisoners to argue counsel was ineffective
Shelf cloud seen in Raleigh ahead of line of storms
New NC flood monitoring system ready for next big storm
Father puts 1,000 miles on his car to find specialty formula
Show More
Student says he was told not to mention 'Don't Say Gay' law in speech
Clayton police arrest man in shooting that injured 1
More than 75,000 pounds of baby formula lands in US amid shortage
Report: Top Southern Baptists stonewalled sex abuse victims
Arby's is selling a fast-food staple it's never offered before
More TOP STORIES News