In Raleigh, hundreds pledge to 'stand up against hate' at vigil for Charlottesville 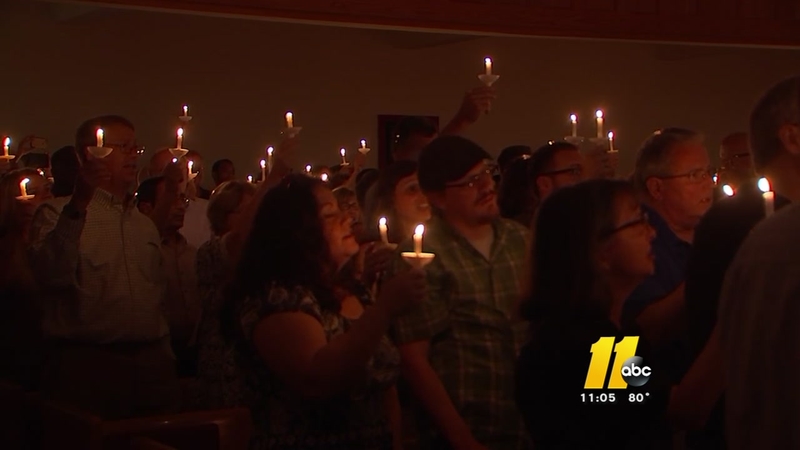 RALEIGH, North Carolina (WTVD) -- On the giant poster boards outside Raleigh Pullen Memorial Baptist Church, people signed their names in permanent marker - a pledge to stand up against hate.

Inside the church, they stood shoulder to shoulder, 500 people in all, raising lighted candles, singing, "Won't let hate put it out. I'm gon' let it shine."

"When hate descended on our neighbors in Charlottesville, it descended on us here in Raleigh," said the Rev. Nancy Petty of Pullen Memorial at the start of the candlelight vigil.

Faith leaders from across the city led the service, Christian, Muslim and Jewish.

Many in this packed sanctuary are still shell-shocked by the pictures and video from Virginia during the weekend; Scores of young white men carrying torches, many spouting messages of hate toward Jews and blacks.

The Rev. Dumas Harshaw, pastor of Raleigh's First Baptist Church, said faith leaders have a responsibility to help change their hearts and minds.

"Right now, we have to teach who Jesus is, the fundamentals of the faith," he said. "And I think people have allowed their heritage or their history of racism to cloud their faith."

Raleigh Mayor Nancy McFarlane told the crowd, this was a defining moment for history and the city.
"So let's write the story of how Raleigh stood up to hatred together," she said.

"Let's write the story of how Raleigh stood up to hate together." - Mayor Nancy McFarlane #Charlottesville pic.twitter.com/OzjRSflYjQ

Afterward, McFarlane told ABC11 she supports Gov. Roy Cooper's recent call for the state to remove all Confederate monuments from public spaces. None of the monuments occupy Raleigh city property, but McFarlane said state lawmakers should restore the power of local governments to decide whether to move the contentious monuments.

But the mayor decried the chaotic scene from Durham, Monday night, when protesters toppled the city's Confederate statue.

"What we don't want is more violence, ripping things down or that specific thing really generating for more of what we saw in Charlottesville," McFarlane said.