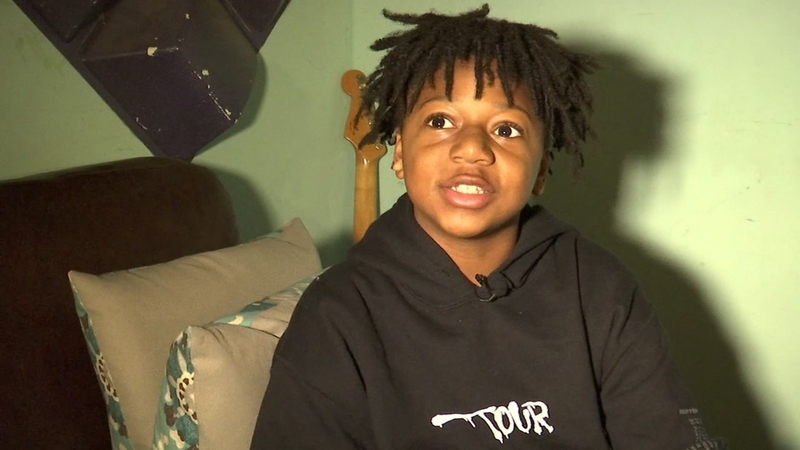 BUNN, N.C. (WTVD) -- Raymond Barnes attends high school in a town with a population in the hundreds. Online, under his professional name of "Ray Emmanuel," his Instagram following tops 100,000.

"It's like reaching more people with the positive message that I have, so it's like a way to drown out all the negativity that people put out in their music," Raymond said.

The 14-year-old freshman has been writing music since he was 7 years old. He started sharing his songs online earlier this year, where they caught the attention of stars like Dwyane Wade and Taraji P. Henson. His follower count quickly grew from hundreds to tens of thousands, providing him a large platform.

A Bunn High freshman is gaining attention for his musical talents. After being featured on ⁦@NFL⁩ IG account w/ Vikings star ⁦@dalvincook⁩, Ray Emmanuel is performing this weekend in Raleigh. Hear his message of positivity at 4:30 + 5:30 ⁦@ABC11_WTVD⁩ pic.twitter.com/F3aqSgH3Lj

"It was kind of overwhelming at first, but then after that, I had to realize now I have to do the right thing now with the attention is on me and not just use it as many people do for all the wrong reasons," he said.

Earlier this month, he was featured on the NFL's Instagram account performing next to Minnesota Vikings star running back Dalvin Cook. Despite his large online presence, Raymond notes he doesn't have a ton of experience performing in front of large crowds.

"Just always been shy to rap in front of people, to release anything. I've always been like that. Just seeing that I can't really be like that anymore, but it's helped me with my confidence," he said.

On Saturday, he'll perform at the John Wall Invitational at Broughton High in Raleigh, an opportunity to showcase his work.

"Everything you say and do can make an impact in people's lives," said Raymond, who stresses positive messages in his lyrics.

Despite his busy schedule, he still performs with his church in Louisburg.

In school, he enjoys science and history. Off-camera, his dad explained his love of history carries over into his music, noting that Raymond studies rap dating to the 1980s. His favorite musician, however, is still currently a star - J.Cole, the Grammy-nominated rapper who grew up in Fayetteville.

"It was very much just inspiration for me. If he can do it, I can too," said Raymond, who has listened to every song J. Cole has released.