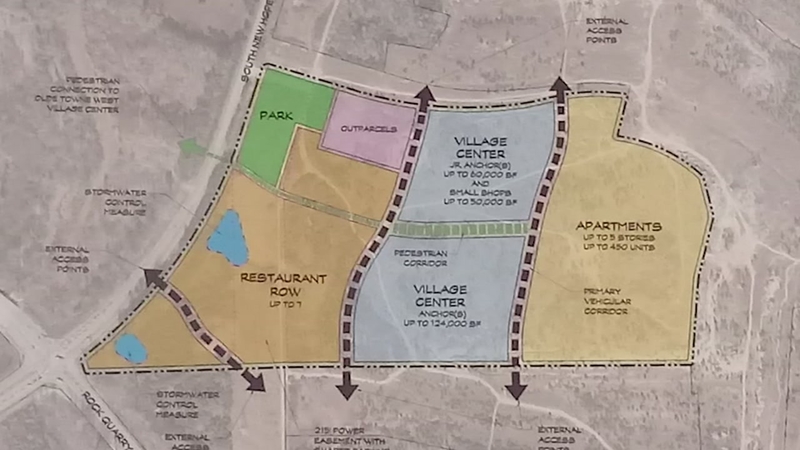 RALEIGH, N.C. (WTVD) -- The landowners for the commercial part of the Olde Towne project in Southeast Raleigh have applied for a rezoning request.

The request includes allowing up to 450 apartments, a 300,000 square foot shopping center with a grocery store and as many as nine stand-alone restaurants on 102 acres on South New Hope Road.

The other 515 acres that make up Olde Towne have a different owner that will turn the space into a residential area.

Up to 450 apartments, a 300k square foot shopping center with a grocery store and as many as 9 stand-alone restaurants on 102 acres on South New Hope Road. We’re bringing out the drone to show you the new plans for the Olde Towne project in Southeast Raleigh at 6p #abc11 #drone pic.twitter.com/R14hVNj6Xv

Walking said the project doesn't yet have a developer, but that it's expected to cost more than $100 million.

He said it'll likely be 18 to 20 months before construction begins.

Work on Olde Towne started in 2003 but stalled during the recession.

Residents said they are eager for the project.

"It could be very convenient for us and everybody in the community," said Amari Williams, who lives nearby. "I feel this is a good thing. I'm glad they're actually finally building this."

"I think it will be very helpful. It could be walking distance or they can bike," said resident Meghan McCulloch.

"We want to see something done positively in this community and Olde Towne seems like a good idea from what they have proposed," said Jacqueline Griffin.

She lives nearby and has been following the project.

"I'm ready," Griffin said. "We're ready for it. We want to see something new."