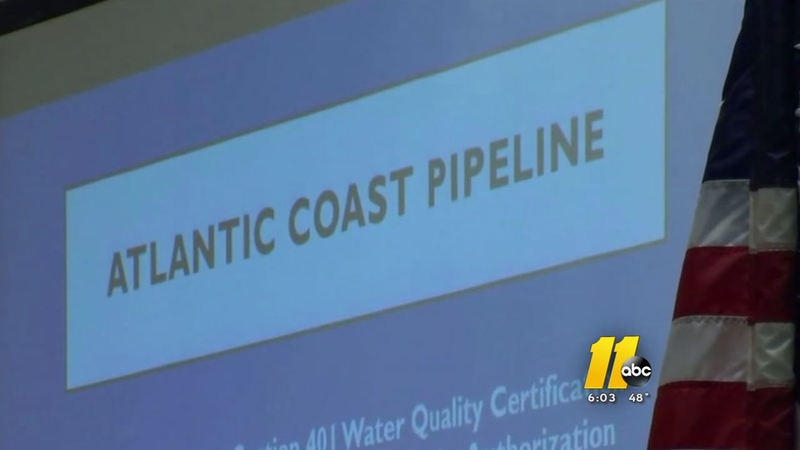 At a news conference outside the Terry Sanford Federal Courthouse, NCGOP Chairman Robin Hayes accused Governor Cooper of engaging in an "obvious pay for play situation" in the recent approval of the Atlantic Coast Pipeline, and the succeeding establishment of a $57.8 million hazard mitigation fund by the energy companies building the pipeline.

"This is not a message that builds confidence in our citizens and it definitely sends a very negative message to potential businesses looking at North Carolina," Hayes asserted to ABC11, laying out the reasons he thinks Cooper violated the federal Hobbs Act. "They will see that it is a distinct possibility - that based on what Governor Cooper has done here - you're going to have to pay to play to get permits that, should you meet the requirements, you should otherwise be eligible for."

MORE from @NCGOP on @NC_Governor: “It’s an obvious pay for play.” @ABC11_WTVD pic.twitter.com/A6r04BSmar

The Atlantic Coast Pipeline is a $5 billion project proposed by a consortium of Mid-Atlantic energy companies, including Duke Energy, with a 600-mile route touted as the best way to increase natural gas supply to the booming Piedmont.

Duke Energy is one of four major companies behind the project, which also includes Dominion, Piedmont Natural Gas and Southern Natural Gas. The pipeline, as currently designed, would transport natural gas shale from the Ohio Valley and deliver it to West Virginia, Virginia and North Carolina. The North Carolina segment would snake through eight counties: Northampton, Halifax, Nash, Wilson, Johnston, Sampson, Cumberland and Robeson.

In January, the North Carolina Department of Environmental Quality issued a 401 water quality certification that was required for the Atlantic Coast Pipeline project to move forward in North Carolina, a decision that had been met with considerable opposition in the affected counties.

On the same day as the DEQ's move, Governor Cooper announced a deal made with the energy companies to create a fund used for "environmental mitigation initiatives such as reducing the carbon footprint and expansion of renewable energy sources."

In response, the General Assembly quickly inserted the fund into HB 90, a sweeping education reform bill that gave legislators control of the fund, and then reallocated the money eight eastern North Carolina counties, partly on the basis of the number of students in each district and partly on the miles of pipeline going through the district.

"It's just hard to believe that the class size mandate and Pre-K is mixed up in all of this," Cooper said in response to HB 90, which he chose not to veto. Cooper said the move would also threaten the fund because he says the energy companies did not plan on funding North Carolina education projects.

"They have put the whole fund at risk," Cooper added. "I don't know what the Atlantic Coast Pipeline is going to do. (Republicans) should really be funding education all 100 counties."

Kristi Jones, Cooper's Chief of Staff, also sent a letter to the General Assembly, vowing "The mitigation fund was established independently of the DEQ permitting process, which is still underway," and noted that the executive order setting up the fund was to be directed to follow the state's Public Records and Open Meetings laws, the State Ethics Act and "additional provisions preventing conflict of interest."

In addition to the NCGOP's request for a federal investigation, Senate Rules Chairman Bill Rabon (R-Brunswick) has called for a legislative oversight hearing on Cooper's handling of the fund.

While Governor Cooper's office stayed silent on Tuesday, North Carolina Democratic Party leaders sounded off on what they called an "absurd" move requesting the investigation.

"Republicans are flailing from one conspiracy to the next because they're terrified of the wave of Democratic enthusiasm that is going to sweep them out of office," NCDP spokesman Robert Howard said. "Republicans latest conspiracy theory has no evidence behind it, revealing just how desperate they are to take the focus off their efforts to rig the system for their own political benefit."
Report a correction or typo
Related topics:
politicsraleighncrepublicansstate politicspoliticsroy cooperpipeline
Copyright © 2022 WTVD-TV. All Rights Reserved.
TOP STORIES
Court papers show how investigators linked suspect in Hedgepeth murder
As last-ditch effort, Cary tapas bar launches fundraiser to stay open
Supreme Court to hear challenge to race in college admissions
George Floyd's family reacts as civil rights trial begins
Eateries hope for community support during Triangle Restaurant Week
No charges for Johnston County deputy who shot drug suspect in wrist
Mental health providers of color see influx of patients
Show More
LATEST: Next steps in fight against COVID-19
Getting paid on Venmo or Cash App? New tax rule might apply to you
Alex Murdaugh hit with more charges connected to 4 new clients
8,500 troops placed on heightened alert for European deployment
Cruise ship takes passengers to Bahamas to avoid Florida warrant
More TOP STORIES News