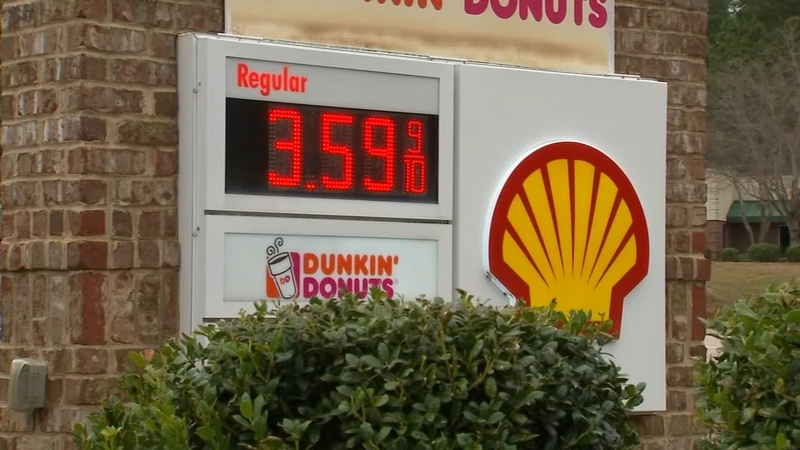 RALEIGH, N.C. (WTVD) -- People are paying way more than they want to at the pump and plumped-up gas prices are putting a tighter squeeze on finances.

South Saunders Street in Raleigh is usually considered a good option for low gas prices, but ABC11 found several stations selling a gallon of regular for $3.59, which is 12 cents higher than the statewide average.

"They're getting higher every second it feels like," said Raleigh resident Mikenzie Butler

Seeing some lines at the pump. Gas prices shooting up - some folks paying nearly $100 to fill up. The president of a NC gas distribution company says, “short-term, this is isn’t going to be pretty.” #ABC11 pic.twitter.com/NLJlfAzy1L

The turmoil between Ukraine and Russia is affecting already high prices and the rise is coming as the country is experiencing eight consecutive weeks of increases.

"(I'm) worried, a little bit concerned," said Wendell resident Dustin Reed. "Usually (the cost to fill up my car is) around $31 for me and just spent $41."

Thursday was a rocky day on Wall Street. The stock market tumbled then rebounded.

401Ks are taking a hit. Chunks of money are evaporating from retirement accounts and investments are falling several points from a year ago.

Some people are not wanting to check their returns.

It's one more thing for folks already struggling with inflation, which reached a 40-year high earlier this month. Inflation soared 7.5%.

The latest Consumer Price Index from the U.S. Department of Labor shows a 0.9% increase in food prices from December to January.

Meat, poultry, fish and eggs have seen the biggest jump at nearly 2%.

Energy prices are up.

Folks in the Triangle are experiencing sticker shock and getting in big utility bills from January, a cold month when there were three wintry weather events.

People are looking for ways to scale back and cope with the mounting increases.

"I'm just conscious about how much to drive," said Alyx Humayra.