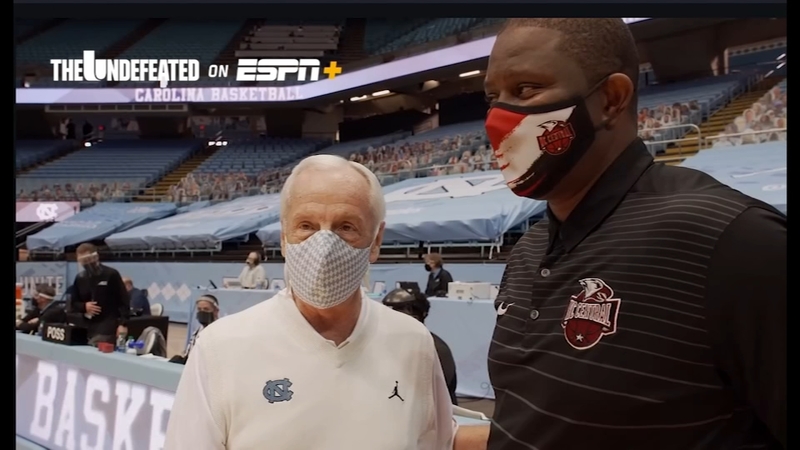 LeVelle Moton on Roy Williams: 'He was a trailblazer'

DURHAM, N.C. (WTVD) -- When the North Carolina Central University men's basketball team faced off against the Tar Heels in Chapel Hill in December, Eagles head coach LeVelle Moton had no idea it would turn out to be Roy Williams' final season.

"Not only is he a legend, he's on my Mt. Rushmore of coaches," Moton said.

You can look at the banners and list the victories, three national titles among them, but if you ask Moton how Williams changed college basketball, he will tell you it's how the Hall of Famer, retiring after 33 years as a head coach, treated the people around him.

"They don't make them like that anymore," said Moton. "He's learned so much from Dean Smith. He's brought those morals and values into a game where, nowadays, the morals and value system is out the door and it's all about sheer competition."

"No longer feel I am the right man for the job," Coach Williams says
EMBED More News Videos

Saying he no longer felt he was "the right man for the job," UNC men's basketball coach Roy Williams announced his retirement after 33 seasons as a head coach in the NCAA.

A last-minute matchup between their two teams, prompted by COVID-19 punching holes in both their schedules, started with a phone call; Williams, calling Moton on a Wednesday, inviting his team to travel from Durham that Saturday.

Roy Williams' retirement from North Carolina: Jay Bilas on why Roy is irreplaceable

It was also Williams who was the first person to reach out and offer support after Moton was hired at the Durham HBCU in 2009.

"He said, 'people will never understand that you and I have more passion in our pinky than the average fan of our universities because we attended the university and now we're coaching,'" Moton said. "So no one loves the university more than us."

Moton said that love for his community is why Williams always treated his team as his family but it's his children and grandchildren he knows Coach Williams is eager to enjoy more of.

With nothing left to prove, Moton said Williams left it all on the floor.