'He died doing the job he loved': Community honors NC deputy killed in line of duty 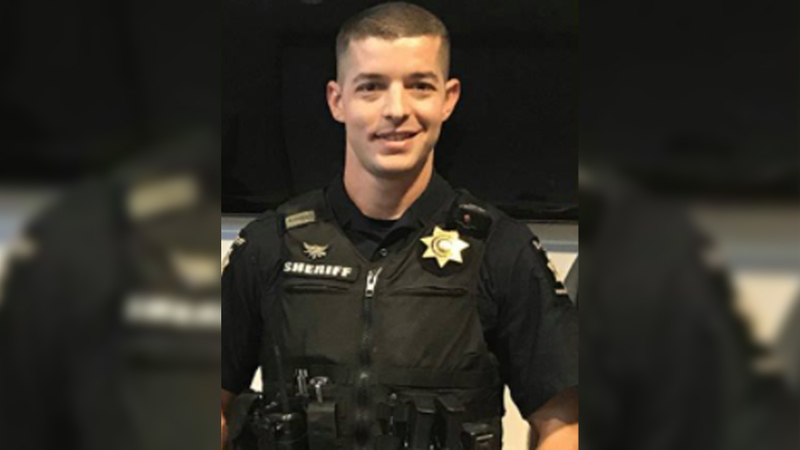 HENDERSONVILLE, N.C. (WTVD) -- A western North Carolina community is paying its respects to an officer that was killed in the line of duty on Thursday.

Ryan Hendrix, with the Henderson County Sheriff's Department, died after being shot in the face while responding to a break-in call on the morning of Sept. 10. A gunman started shooting at deputies, hitting Hendrix. During the shootout, the suspect, now identified as Robert Ray Doss, Jr., was also shot and killed.

On Sunday, hundreds gathered outside of the Sheriff's Office to pay respects to the officer. Organizers telling ABC-affiliate WLOS that the event was meant to "unify community members." Participants sang prayed and read scripture to honor Hendrix and his family.

A western North Carolina deputy has died from his injuries Thursday afternoon following an early morning shootout that left the gunman dead.

Deputy Hendrix was a Marine veteran who has two children, a 6-year-old boy and a 9-year-old girl. Hendrix was engaged and was set to get married next month.

The morning of his death, the sheriff's office wrote, "We all know the tragic outcome, but Ryan refuses to let the story end there. Even in passing Ryan continues to exemplify a servant's heart. You see, Ryan was also an organ donor. He will continue to help strangers for a lifetime, even after making the ultimate sacrifice. Ryan's family wants everyone to know that 'Ryan was doing the job he was born to do and he died doing the job he loved."
Report a correction or typo
Related topics:
community & eventsofficer killednorth carolina newsmemorial
Copyright © 2022 WTVD-TV. All Rights Reserved.
OFFICER KILLED
Fallen trooper remembered as role model, devoted family man
Charlotte officer, mother of 3 killed in I-85 crash
Driver charged in crash that killed Knightdale police officer
Knightdale officer killed in line of duty laid to rest
TOP STORIES
Cooper 'more concerned' about this winter storm than the last one
Winter storm likely to hit east of I-95 hardest
Schools in Wake, Durham counties to close Friday
Contact tracers' role changes as pandemic reaches new heights
Flavor District, Triangle's largest 'ghost kitchen' to open in fall
Residents in Wilson prepare for black ice and snow
Reporter hit by car on live television, but continued reporting
Show More
Check your tires before -- and after -- the wintry weather
American Airlines flight diverted over maskless passenger
Only one monoclonal antibody treatment is effective, NIH says
Florida doubles down on anti-critical race theory legislation
LATEST: Governor says focus on vaccines, testing -- not mandates
More TOP STORIES News