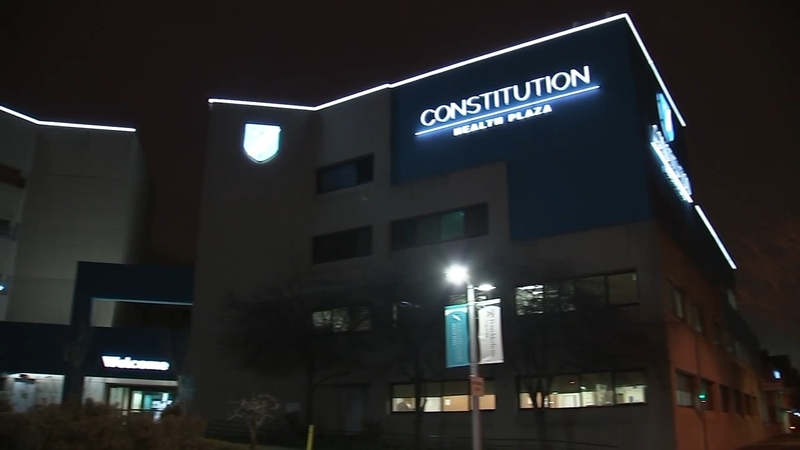 PHILADELPHIA -- In an abrupt turn of events, the plan for the country's first supervised injection site to open in Philadelphia stopped in its tracks Thursday.

The controversial injection site to be operated by non-profit Safehouse was scheduled to open next week at Constitution Health Plaza.

However, a spokesman with the Constitution Health Plaza says they are canceling the lease.

"We have made the decision to cancel plans to locate a supervised injection site at Constitution Health Plaza," Anthony Campisi said. 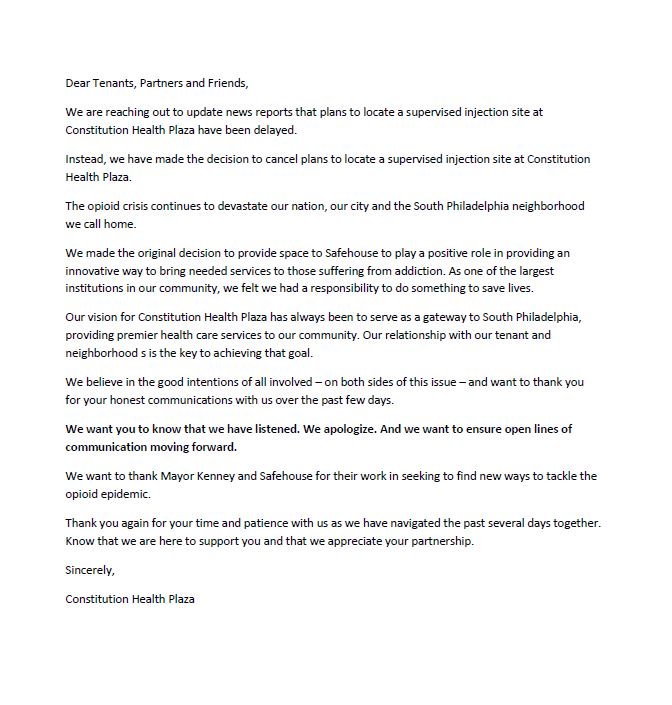 On Friday morning, Anthony Giordano of "Stand Up South Philly and Take Our Streets Back" expressed relief, but said a rally is still planned for 3 p.m. Sunday.

"We've won the battle. We haven't won the war. I don't believe that the city's going to back down. I think they're going to try to backdoor this someplace else. We're not going to put up for it. Nowhere in Philadelphia. So if any of the other leaders out there in other communities in Philadelphia need us out there, I'll gladly come anywhere," Giordano said.

Mayor Jim Kenney, who is a supporter of safe injection sites, said Safehouse voluntarily delayed its opening so it could focus on meeting with the community, but the building owner alerted the City that he was no longer interested in moving forward with the lease.

"In light of this development and the strong concerns voiced over the past two days, it's clear that no site will open imminently. I am glad that this will allow Safehouse more time to examine its options, and to engage the community," Kenney said.

The council members who represent the area say that was part of the problem, residents were never consulted and left in the dark from the beginning.

"You can't come into a community, make a decision such as putting a safe injection site, putting children in danger, without consulting with the community. But most importantly the site was absurd in the first place," Councilman Kenyatta Johnson said.

"So I think they're gonna push the reset button here and get the folks to see what's the best way to go forward from this point," Councilman Mark Squilla said.
On Wednesday, the announcement of the plans were met with controversy by local leaders and the community.

"We had no advance notice from the administration or the organization. My concern with this is that we are acting in haste and we will repent in leisure," Councilwoman Katherine Gilmore Richardson said.

"We were ambushed," one resident said.

Under the Safehouse plan, people could bring drugs to the clinic-like setting, use them in a partitioned bay and get medical help if they overdose. They would also have access to counseling, treatment and other health services.

In 2018, WPVI traveled to Canada, where safe injection sites are already up and running. The visit came with mixed reactions.

The facilities are clean and a gateway to rehabilitation. But there was also prevalent drug use and sales outside the facilities during and after operating hours and other apparent crimes.

"I support recovery. I have methadone clinics in my district and I look forward to helping people off narcotics. I do not believe in shooting galleries," Councilmember Curtis Jones said.

The Safehouse opening has been on hold for much of the past year while Judge McHugh held evidentiary hearings to determine whether the plan violates a 1980s-era drug law known as the "crackhouse statute." McSwain believes it does and sued the Safehouse organizers. Along with Rendell, organizers include Ronda Goldfein, executive director of the AIDS Law Project of Pennsylvania.

McHugh found Safehouse did not run afoul of the law.

Safehouse did not immediately respond to a request for comment Friday.