Jones, a North Carolina native, died Thursday night in Florida, where he had been hospitalized in failing health, Celtics spokesman Jeff Twiss said.

"Sam Jones was one of the most talented, versatile, and clutch shooters for the most successful and dominant teams in NBA history," the team said in a statement.

"His scoring ability was so prolific, and his form so pure, that he earned the simple nickname, 'The Shooter,'" the Celtics said. "The Jones family is in our thoughts as we mourn his loss and fondly remember the life and career of one of the greatest champions in American sports."

RIP to the Legendary Sam Jones. Thank you for being a mentor, friend and tremendous model for life. I chose NCCU because of YOU! TEN Championships, Legacy fulfilled…Job well done. Love you my guy! pic.twitter.com/uA0ilEaPAI

The Celtics honored Jones with a moment of silence before Friday afternoon's game against the Phoenix Suns, showing a video tribute on the screen hanging among the championship banners above the parquet floor at the TD Garden. His No. 24, which was retired by the Celtics in 1969 while he was still an active player, was also displayed on the monitor in the hushed arena before a still photo of him in a suit and the words "Sam Jones 1933-2021."

"Another one of my dear friends lost," Celtics broadcaster Cedric Maxwell wrote on Twitter. "Well, the banks are open in heaven this #NYE."

NBA Commissioner Adam Silver said Jones will be remembered as "one of the most prolific champions in all of professional sports."

The Jones family is in our thoughts as we mourn the loss of Sam Jones and fondly remember the life and career of one of the greatest champions in American sports.

"His selfless style, clutch performances and signature bank shot were hallmarks of an incredible career," Silver said. "Sam was a beloved teammate and respected competitor who played the game with dignity and class. We mourn the passing of a basketball giant and send our deepest condolences to Sam's family and the Celtics organization."

Jones' 10 titles are second only to his Celtics teammate Bill Russell.

Russell once said that if there was one shot to be made to win the game, he would want Sam Jones to take it.

Celtics coach Red Auerbach discovered Jones when he went to North Carolina to scout the national champion Tar Heels for the upcoming draft. Auerbach said he was told that the best player in the state was actually on Hall of Fame coach John McLendon's team at North Carolina Central.

In four seasons with the Eagles, Jones scored 1,745 points and averaged 17.8 points per game in 98 games. He was three-time All-Conference and his No. 41 jersey was retired by North Carolina Central.
. 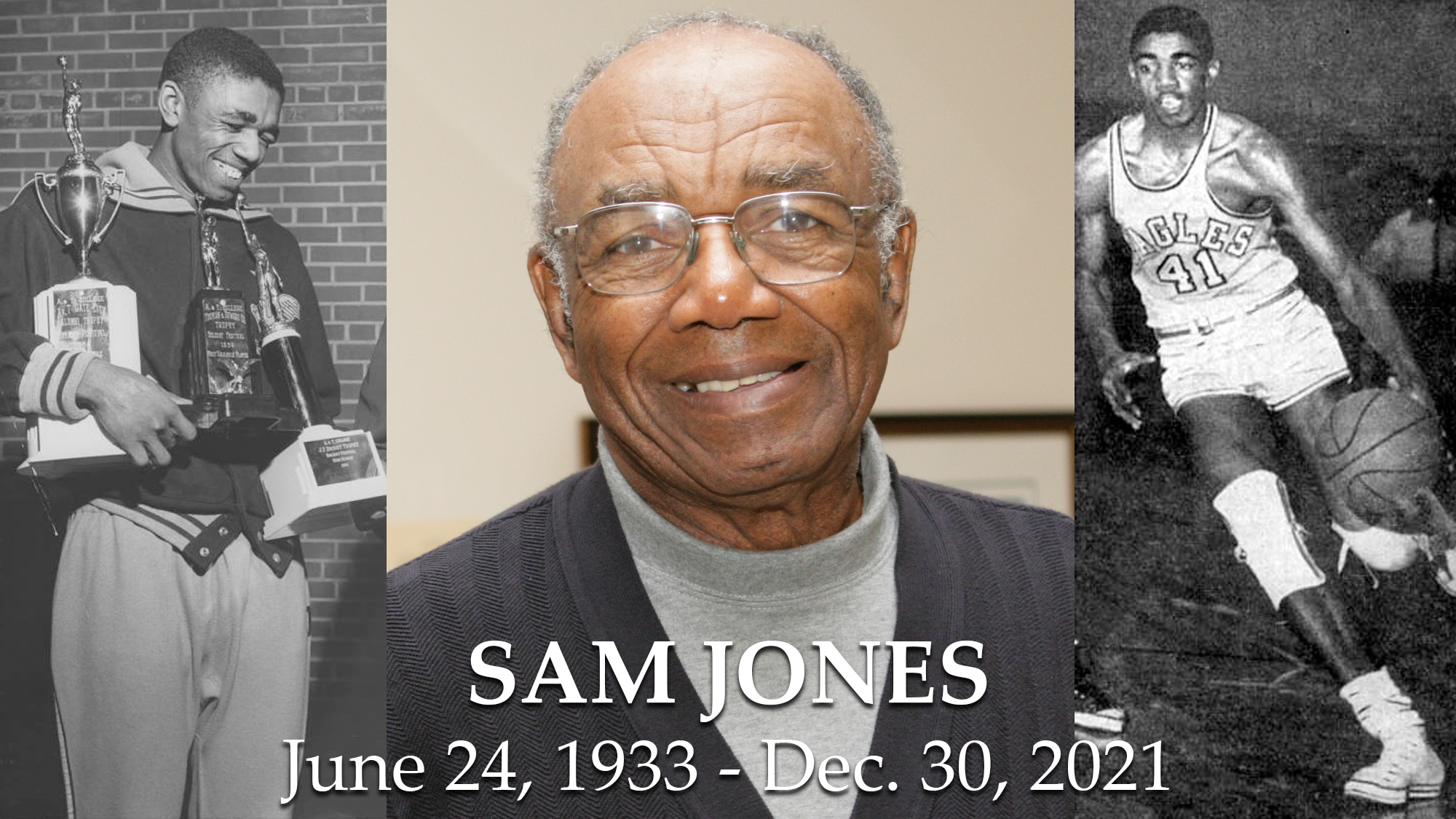 In March 2015, the night his jersey was unveiled in the rafters of McDougald-McLendon Arena, Gov. Pat McCrory presented Jones with The Order of the Long Leaf Pine award, the highest honor that can be bestowed upon North Carolina citizen.

Auerbach selected Jones in the first round of the 1957 draft, eighth overall, despite never seeing him play.

The Celtics were coming off a title, and Jones thought he had little chance of making it into the lineup, with Bob Cousy and Bill Sharman forming a legendary backcourt in Boston.

"I never felt so miserable in my life when I got the news," Jones said at the time. "I really thought it was the end of my basketball career. Sure, I was thrilled with the honor. ... I never thought I'd be able to break into the game, let alone the lineup."

Jones averaged 4.6 points per game his rookie season, but Auerbach liked his speed, intelligence and team-first approach. When Sharman was sidelined by injuries early in the 1960-61 season, Jones got his shot to start and became a fixture on the championship teams.

"Sam was one of the great shooters of all time," Auerbach once said. "But he was team-oriented. All he wanted to do was win. ... The great athletes, they played for pride."

Jones went on to average 17.7 points and just under five rebounds in 12 years with the Celtics, leading the team in scoring five times - including the 1963 champions, who had eight Hall of Famers on the roster.

Jones was even better in the playoffs, averaging 18.9 points per game in the postseason. When he retired in 1969 at the age of 36, he was the only player in Celtics history to score more than 50 points in a game.

"You look at the championships and what he did, it's obviously a big loss for the community here," Celtics coach Ime Udoka said before Friday's game.

Using a bank shot that was unconventional even then, Jones came to be known as "Mr. Clutch" after a series of game-winners, including a buzzer-beater to clinch the 1962 Eastern Conference finals. He hit an off-balance, wrong-footed jumper to win Game 4 of the '69 Finals; instead of heading to Los Angeles trailing 3-1, the Celtics tied the series against the Lakers at two games apiece and went on to win in seven.

Jones retired after that title, having won his 10 championships in 12 seasons. A five-time All-Star, he was was inducted into the Naismith Memorial Basketball Hall of Fame in 1984.

Jones, who was born on June 24, 1933, in Wilmington and was a graduate of Laurinburg Institute, was named to the NBA's 25th, 50th and 75th-anniversary teams. His death comes a year after teammate Tommy Heinsohn and 13 months following the death of K.C. Jones.

Jones burnished his reputation for clutch scoring during the playoffs. In Game 7 of the 1962 Eastern Conference finals against the Philadelphia Warriors, Jones hit a game-winning jumper with two seconds remaining over the outstretched arms of Wilt Chamberlain. In the Finals against the Los Angeles Lakers that year, Jones scored five of the Celtics' 10 overtime points in Game 7 to help the team to its fourth straight title.

He retired from basketball in 1969 at the age of 36. In his final game, a Celtics win over the Lakers in Los Angeles in Game 7 of the Finals, Jones scored 24 points.

At a ceremony to honor him after his retirement, Auerbach said, "I would like to thank Sam Jones for making me a helluva coach."

After retiring, Jones became a substitute teacher in Maryland. He continued to teach for more than 30 years.