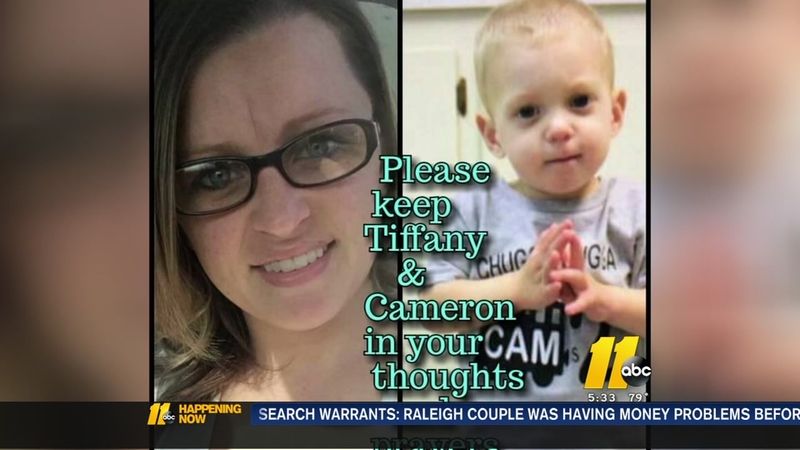 LEE COUNTY, NC (WTVD) -- A local mother and son are recovering at UNC Hospitals in Chapel Hill after being attacked by a dog in Sanford on Easter Sunday.

The attack happened while they were visiting family in the 4000 block of Lee Avenue in Sanford this weekend.

The community is rallying around Tiffany Griffis and her 2-year-old son Cameron Moore to help care for her other three children while she recovers.

Griffis's cousin, Destiny Godfrey, was there when it happened.

She said the dog went for the 2-year-old first. Griffis was able to lift him above her head, but the dog then started going for her legs.

Godfrey said they were dropping off a plate of food to her when a nearby dog escaped from a neighbor's yard.

The bottom of the neighbor's chain-linked fence was unsecured.

The battle to stop the attack was a desperate one according to Godfrey, who tried to stop the dog by hitting him with garden shears.

When that didn't work she moved to more extreme measures.

"The next thing I thought was 'God, what do I do,'" she said, "And it's like I heard this voice in my head telling me 'stab him, stab him,' and I grabbed the biggest knife I could see, and I just started stabbing him."

Godfrey said while Cameron is expected to be released from the hospital today, after a bite to his left thigh, Griffis' injuries are much more extensive.

Her fingertips and both legs were mauled. Griffis and Cameron were airlifted to UNC Hospitals following the attack.

Godfrey said that while Griffis' surgery for her legs went well, it's unclear what the road ahead may bring.

Godfrey said she worries about what this could mean for her cousin, a single mother supporting four children.

According to Lee County Animal Control, they are holding the dog for a 10 day observation period. The dog is set to be euthanized afterward.
Report a correction or typo
Related topics:
sanfordhospitaldog attack
Copyright © 2021 WTVD-TV. All Rights Reserved.
More Videos
From CNN Newsource affiliates
TOP STORIES